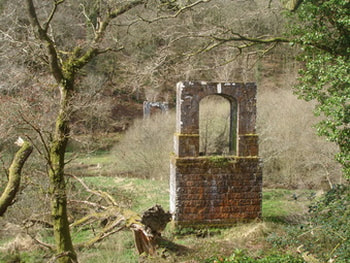 On the Arlington Court estate are two massive bridge piers that were built for a suspension bridge to span the lake. The bridge would have had no practical purpose, but would have given Sir John Chichester a dramatic view from his planned carriage drive from Wooley Lodge to his new house, which had been built in 1823. After his death in 1851, the scheme was abandoned. 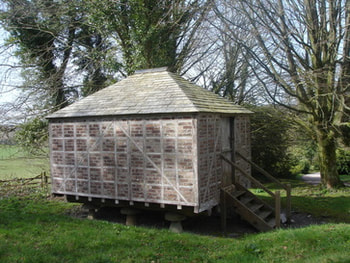 THIS EARLY 19TH CENTURY GRANARY OF A TYPE
ONCE COMMON IN DEVON FORMERLY STOOD AT
DUNSLAND NEAR HOLSWORTHY. THE CORN WAS
STORED IN WOODEN BINS RANGED ROUND THE
WALLS. WHEN DUNSLAND HOUSE WAS DESTROYED BY
FIRE IN 1967 THE GRANARY WAS MOVED
TO ARLINGTON BY THE NATIONAL TRUST. 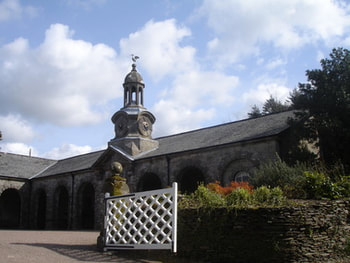 The stables at Arlington Court were built in 1864. 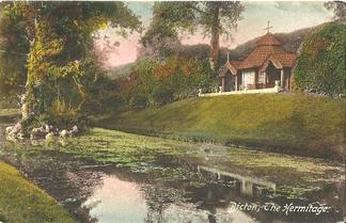 The Bicton Hermitage is on the Bicton Estate, along with a Shell Cottage and the China Tower. The Romantic and rustic styles are from about 1840. 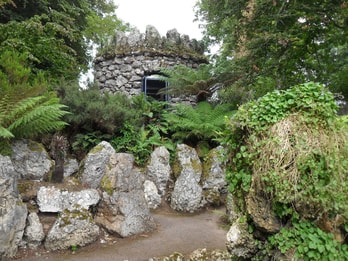 The Shell House and rockery at Bicton Park were made in the early 19th century. 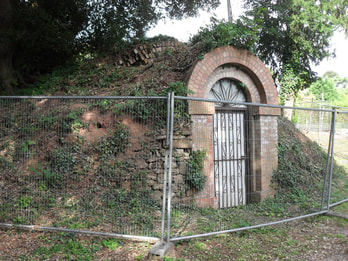 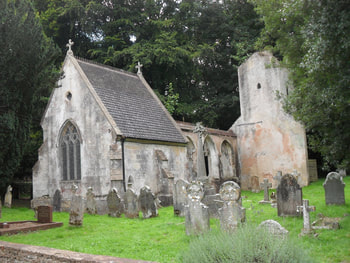 In 1850, the 15th century parish church was deliberately made to look like a ruin, and part of the east wall rebuilt as a mausoleum for John Rolle, the husband of Louisa. The Architect was Augustus Welby Northmore Pugin. 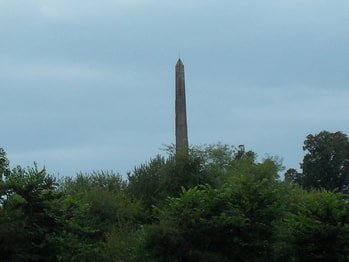 It is thought that the limestone ashlar obelisk that forms an eyecatcher at Bicton Park was erected in 1730. 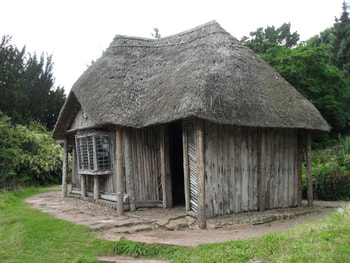 The Bear's Hut at Killerton House was illustrated in a drawing by John Gendall of Exeter in 1831. The interior of the rustic picturesque summerhouse is a 'hermitage'. 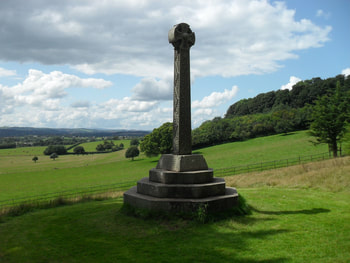 The memorial to Sir Thomas Dyke Acland at Killertion,        erected in 1873, is in the style of a Celtic cross. 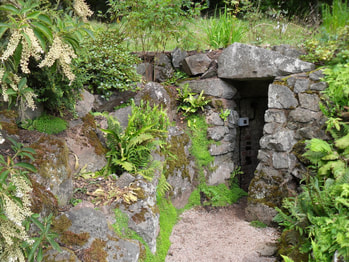 The icehouse in the rock garden at Killerton House was designed by garden designer and horticulturist, John Veitch. It could contain 40 tons of ice. 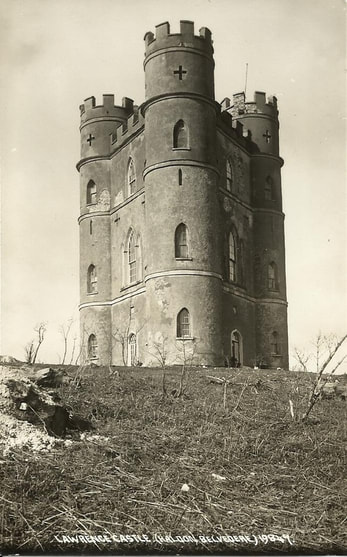 Lawrence Castle was built in 1788, at a cost of between £2,000 and £3,000, for Sir Robert Palk as a memorial to his friend Major-General Stringer Lawrence. Like the tower at Powderham, it was inspired by Shrub Hill Tower at Windsor Great Park.

It was restored in 1994 by the Devon Historic Buildings Trust. 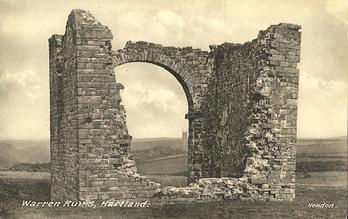 The Pleasure House was first mentioned by that name in a letter of 1738, and may date back to the late 16th century as it was marked on estate maps.

It is said to have been altered by Paul Orchard (1739-1812) so that he could back his carriage into the opening to admire the view. 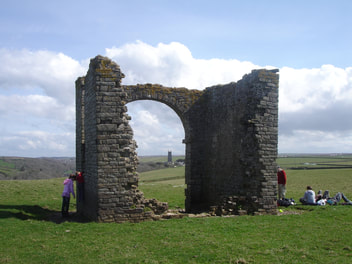 The area is known as The Warren and through the arch      the tower of Stoke church can be seen.

The ruin looks very much as it did about 100 years ago. 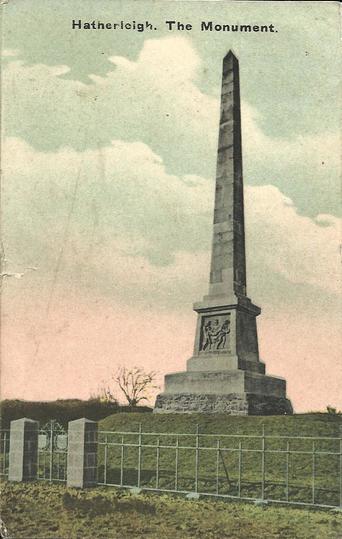 An obelisk was erected in 1860 by the firm E. B. Stephens   of London in memory of Lieutenant Colonel William Morris.   Morris was born at Fishleigh in Hatherleigh and was   involved in the Charge of the Light Brigade and was nursed   by Florence Nightingale. He died of sunstroke in India in   1858, aged 38. 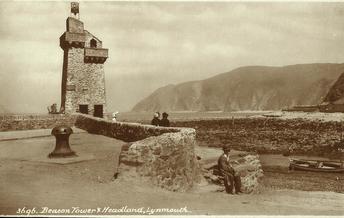 The tower at Lynmouth harbour was built in about 1860   for General Rawdon so that he could store seawater to be   used for indoor bathing at his home at Beach House. Later   the tower was fitted with an electric light and used as a   beacon. 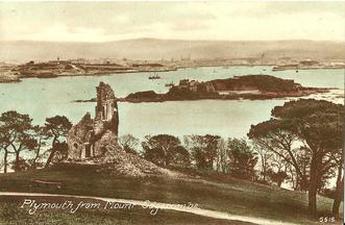 Situated in Mount Edgcumbe Park overlooking Plymouth Sound, the Ruin was probably built around about 1750 by Timothy Brett. At that time it was in Devon until taken over by Cornwall in 1844. 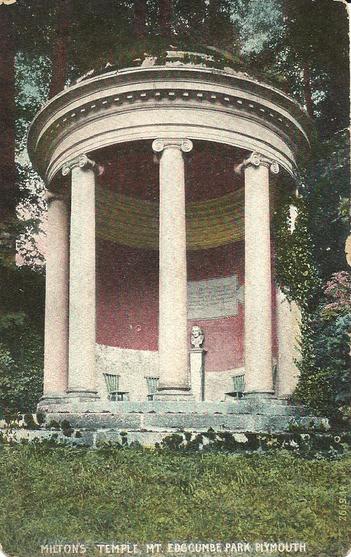 Over head up grow
Insuperable height of loftiest shade;
Cedar and fir and branching palm,
A sylvan scene; and as the ranks ascend
Shade above shade, a woody theatre
Of Statliest view. 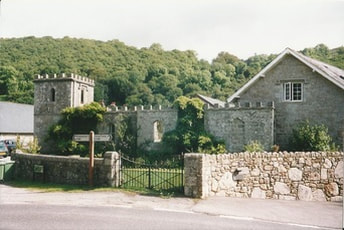 Farm buildings at Wray Barton have been made into a cottage that resembles a church. 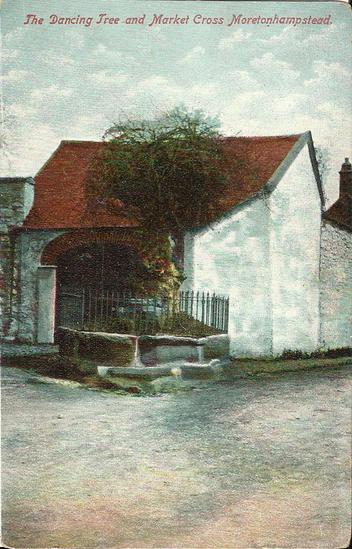 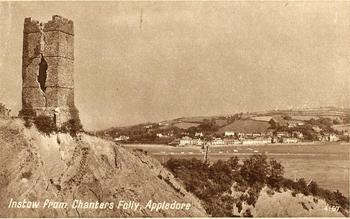 The tower was demolished in 1952 when the council   deemed it unsafe. 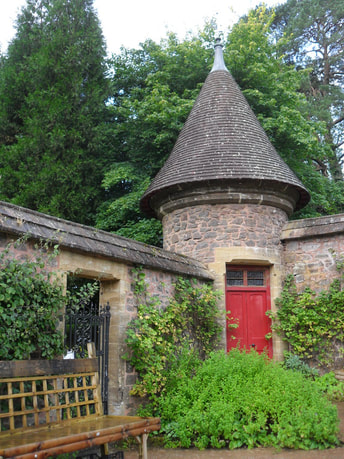 The walled garden turrets at Knightshayes were designed by William Burges in about 1868-74 for Sir John Heathcoat-Amory. 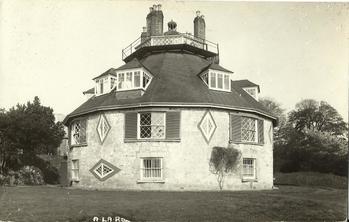 A La Ronde was built in 1798 for two single women, Jane and Mary Parminter. They had visited much of Europe and Italy between 1784 and 1794, and are thought to have got their inspiration from the octagonal basilica of San Vitale at Ravenna.

The gallery contains grottos covered in shells and other materials.
The roof was originally thatched. 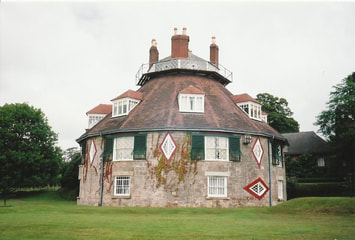