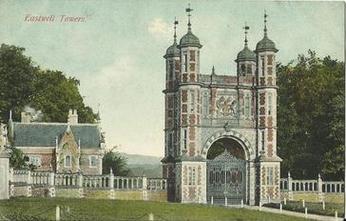 Eastwell Towers is an imposing entrance lodge to the Eastwell Park Estate. It was built in 1848 by William Burn using French flints. Over the gateway is a mosaic of Alexander the Great's victories. There is also the arms of the Winchelsea family who owned Eastwell Park. 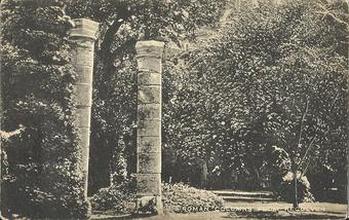 Two Roman-style columns were taken from the old minster at Reculver and are now in the crypt at Canterbury Cathedral. 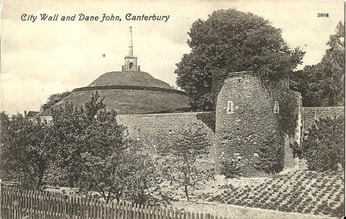 Dane John is a conical burial mound that the Roman wall makes a detour around. A Norman keep was built there before Canterbury Castle was built nearby.

The gardens were landscaped in the 18th century when public execution was still held there. A spiral footpath leads to a memorial to Alderman Simmons, dated 1803. 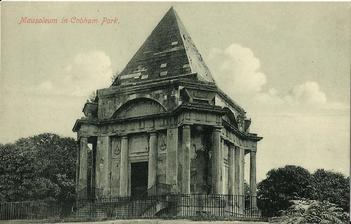 John Bligh, the 3rd Earl Darnley, left instructions in his will for a mausoleum to be built in Cobham Park for members of his family. In 1783, James Wyatt exhibited his Roman Doric design at the Royal Academy and it was completed in 1786 under the supervision of George Dance the Younger at a cost of £9000. In the basement it had 32 coffin shelves but because of a dispute with the Bishop of Rochester it was not consecrated and could not be used for burials. 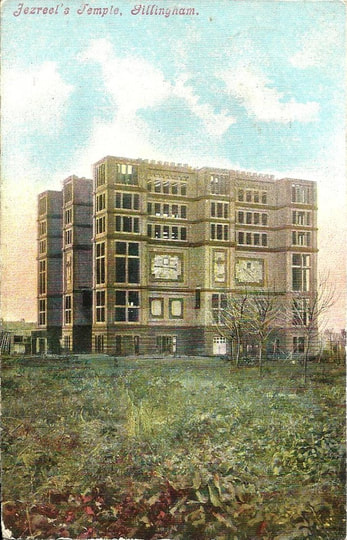 The temple was the vision of James Roland White who, after being influence by the teachings of Joanna Southcott, became known as James Jershom Jezreel. He wanted the building to be a perfect cube but, after advice from architects, he agreed that the sides should be 124 feet and the height 120 feet and made of concrete and steel. He was a heavy drinker and died in 1885. His widow took over the project and the foundation stone was laid in that year. After her death in 1888, the sect fragmented and work on the building ceased.

Jezreel's Temple was finally demolished in 1961. 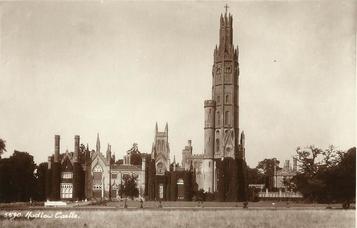 The 170 feet high tower is part of the remains of a   large Gothic house that was demolished in 1951. The   tower was started in 1838 and designed by George   Ledwell Taylor for Walter Barton May. 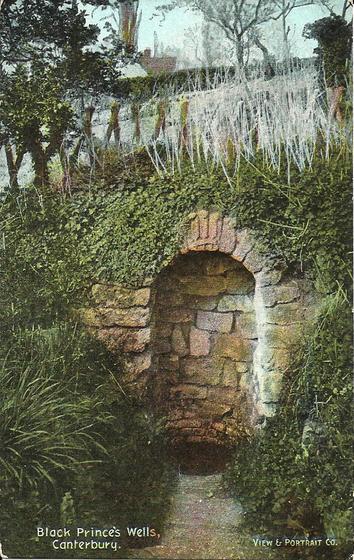 When Edward Woodstock, known as the Black Prince,   was on his last journey from Canterbury to London, he   was suffering from dysentery and sent for water from a   well thought to heal leprosy.

The keystone in the stone arch over the well has the   Prince of Wales feathers and the motto 'Ich Dien'. 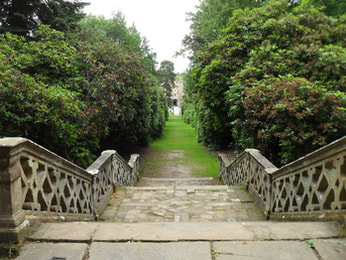 The Golden Stairs, in the gardens of Hever Castle, lead to a terrace from which to view the castle. 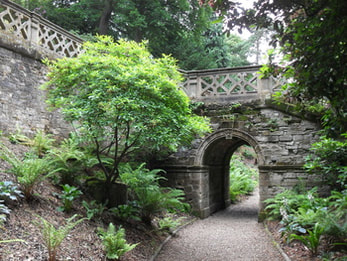 Below the Golden Stairs is a tunnel, as well as a pathway through a fernery. 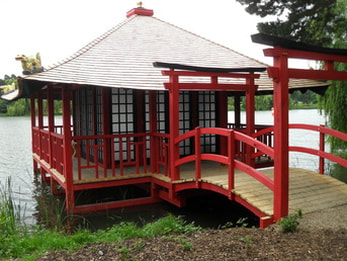 Monty Don opened the Japanese Tea House at Hever Castle on 10th June 2013. The original Tea House was replaced by a pill box during the Second World War. 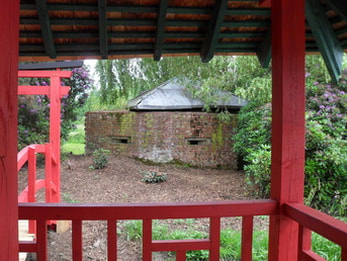 The pill box can be seen nearby, with the roof of the old tea house. 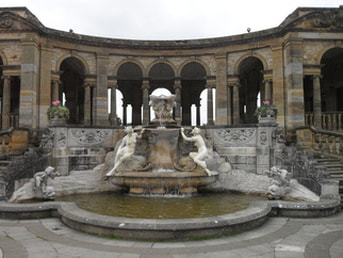 The gardens at Hever Castle were created 1904-1908 and include an Italian garden with a large Loggia with a Piazza that overlooks the lake. 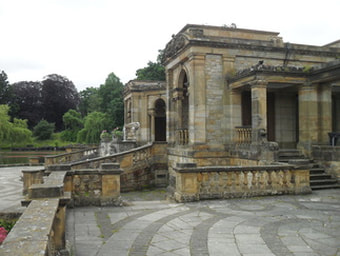 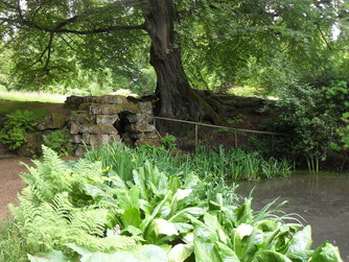 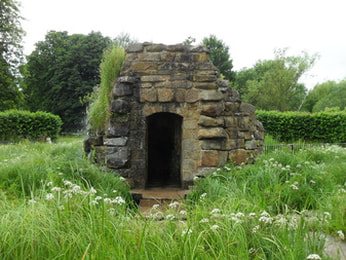 There is a grotto in the middle of the Water Maze at Hever Castle. 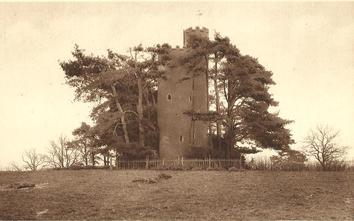 Scott's Tower was erected in 1858 for Rev Sir W M   Smith-Marriot of Spelmonden, who made 'improvements   in the park, orchard and  meadow'. It was built in honour   of Sir Walter Scott and contained a collection of his   works.

​  It stood to the south west of the top of the hill in   Spelmonden Road. 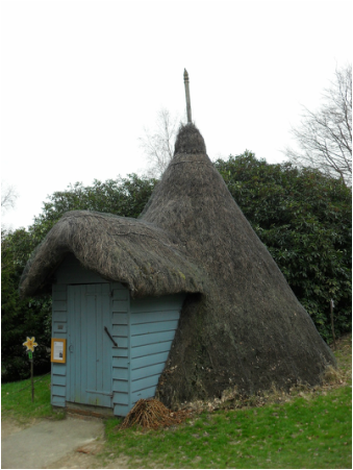 The icehouse near Scotney Old Castle was made in about 1840. 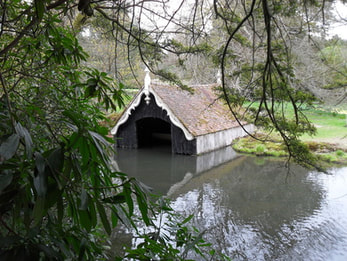 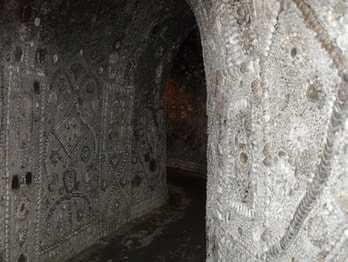 The Grotto at Margate was discovered by a schoolmaster, called Newlove, and his two sons when they were digging out an old well in 1835. They found an oblong chamber and two semi-circular passages that lead to a domed room.

It may have been made at the end of the 18th century by Lady Holland, the daughter of the Duke of Richmond.
There are 2000 square metres of walls covered with shells. 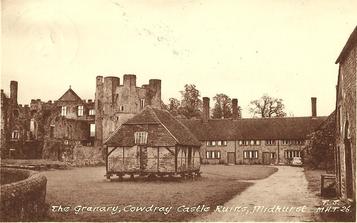 Cowdray Park was a 16th century fortified mansion built   for the Earl of Southampton.

It was destroyed by fire in 1793 and in the early 20th   century was preserved by the first Viscount of Midhurst. 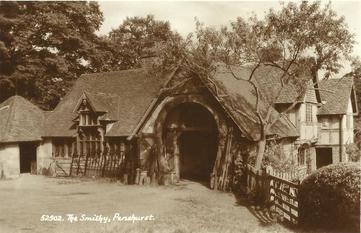 The Smithy was designed in the traditional   architectural style of the Weald by John M Sturgess,   land agent to the Penshurst estate. The datestone bears   the initials PS for Philip Sidney, 2nd Baron de L'Isle; and   the date,1891. The pyramidal roof is surmounted with a   crown of  horseshoe nails and there is a large   horseshoe-shaped timber archway.

Other horseshoe-shaped doorways are at;
​  FORD, Northumberland.
UPSALL, North Riding. 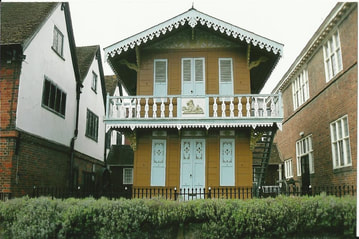 THIS CHALET ONCE STOOD AT GADS HILL PLACE, HIGHAM. IT WAS USED AS A SUMMER STUDY BY CHARLES DICKENS FROM 1865 UNTIL HIS DEATH IN 1870. HE WROTE HIS LAST WORDS IN ITS UPPER ROOM. 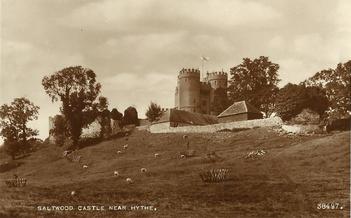 The first castle at Saltwood was built in 488 and was   replaced in the 12th century with a Norman one. In   1580, it was severely damaged by an earthquake.

Saltwood Castle was restored in the 19th century and   the gatehouse used as a residence. 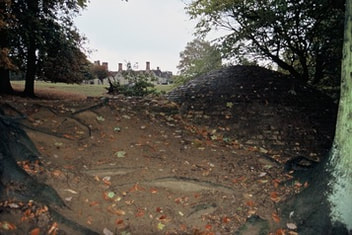 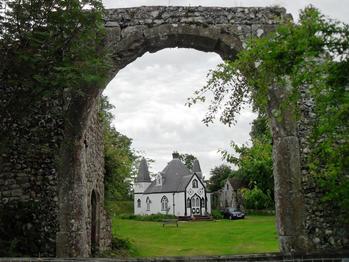 The arch at Knole is part of a sham ruin that was probably built at the same time as the Birdcage in 1761 with masonry from Otford Place, near Sevenoaks. 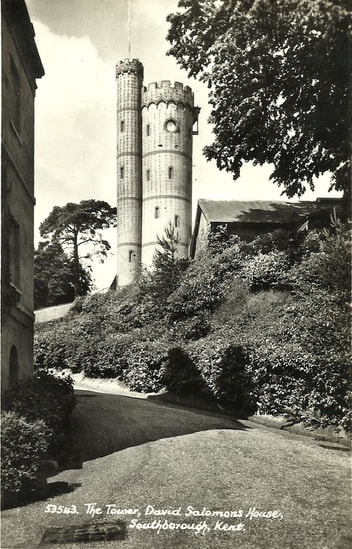 David Lionel Salomons built the tower in about 1876 as a water tower and observatory. He inherited the estate from his uncle, Sir David Salomons (1797-1873), who was a Jewish merchant banker, Lord Mayor of London in 1855 and MP for Greenwich. 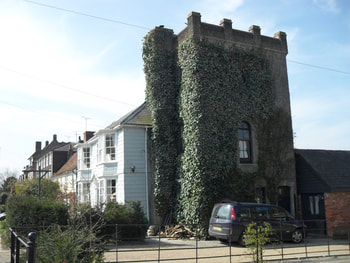 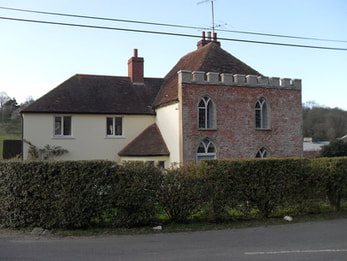 The wall hiding a cottage may have been an eyectcher from the Belmont Park estate. 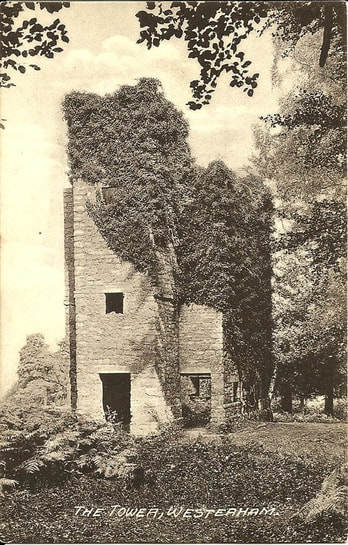 The Tower at Squerryes Court was erected as a belvedere in about 1735 for John Wade. It was said to have been built in order to see St Paul's in London 21 miles away, but would have had to be much taller; it is, however, aligned with Westerham church spire.

By 1840 it was in a ruinous condition and is now covered in ivy.