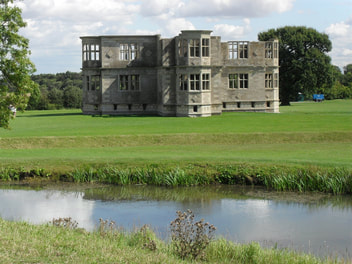 Lyveden New Blield was to be a large banqueting house for Thomas Tresham but he died in 1606 before it was completed. 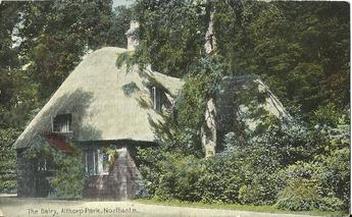 The Dairy at Althorp was built in the late 18th century, probably by the architect Henry Holland.

It is now a dwelling with a 20th century slate roof. 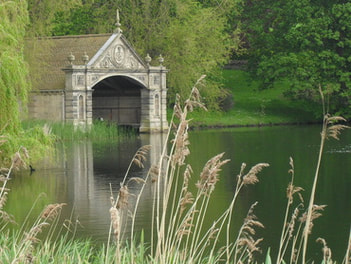 The boathouse on the lake in Burghley Park is dated 1871. 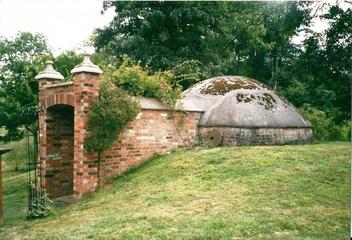 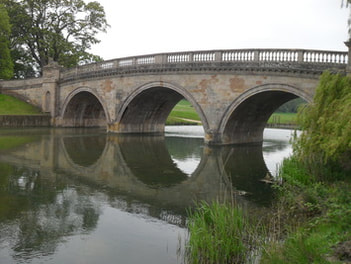 Lancelot Brown designed the Lion Bridge at Burghley in 1775 over the lake that he had made. The bridge cost 1,000 guineas. 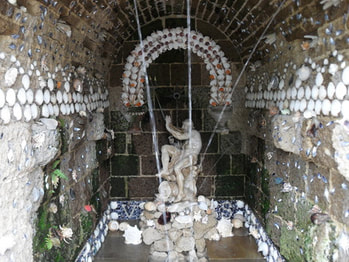 Neptune's Grotto is in the newly created Garden of Surprises at Burghley House. 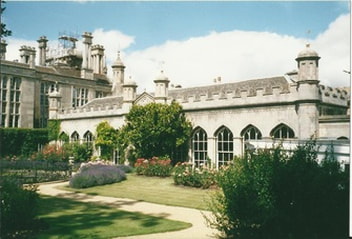 The Gothic orangery at Burghley House was designed by Lancelot Brown in 1756. 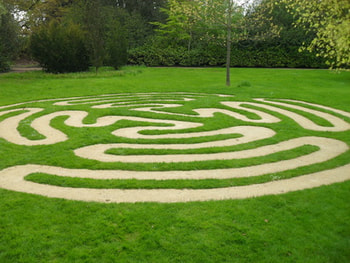 The turf maze at Burghley Sculpture Park was designed by Peter Ransall-Page in 2001. 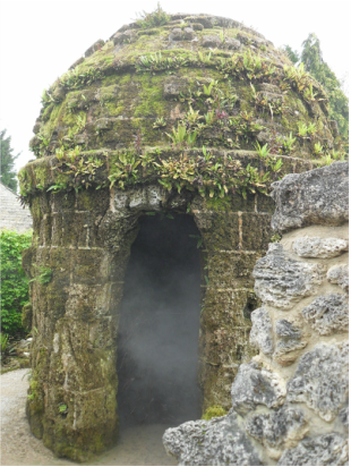 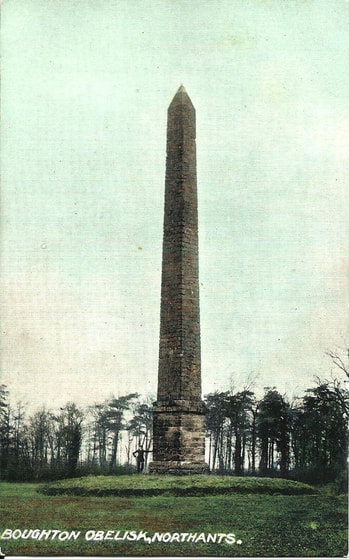 The 100 feet high obelisk at Boughton Hall was built in 1764 for William Wentworth, 2nd Earl of Strafford, of Boughton Hall. It is a memorial to his friend William Cavendish, 4th Duke of Devonshire, who had been educated at Boughton. 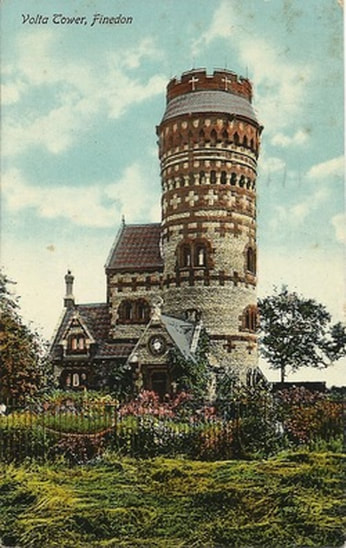 The Volta Tower was built in 1865 for William Harcourt Isham Macworth-Dolben, of Finedon Hall, whose three sons died while he was still alive (1806-1872). The 100 feet high tower was built in memory of his eldest son William, a navel officer, who was lost when the ship Volta sank in the mouth of the River Niger in 1863. A younger son, the poet Digby, drowned in 1867.

On the 16th November 1951 the tower collapsed killing Mrs Florence Northen whose husband was outside and survived. The ill-fated tower had been constructed without mortar. 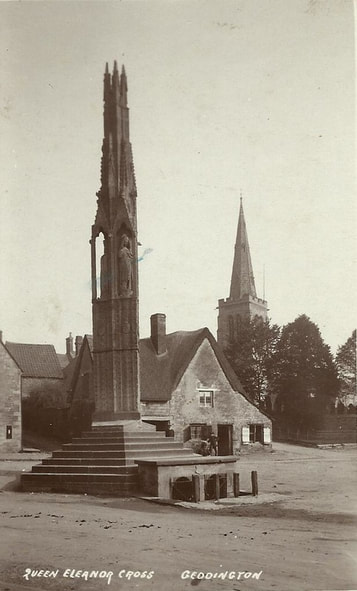 The Eleanor Cross at Geddington is one of the three remaining of the twelve Crosses erected by King Edward I after the death of his wife, Eleanor of Castile.

See HARDINGSTONE below for detail. 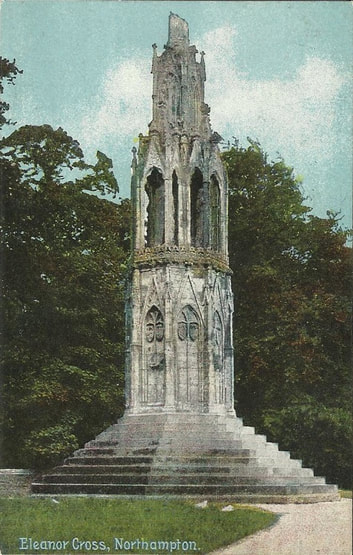 After the death of Eleanor of Castile at Harby near Lincoln in 1290, her husband, King Edward I, had twelve elaborate stone crosses erected at the funeral cortege resting places on the way from Lincoln to London.

The other remaining Eleanor Crosses are at:
GEDDINGTON, Northamptonshire (above)
WALTHAM CROSS, Hertfordshire
The one at Charing Cross is a Victorian replica. 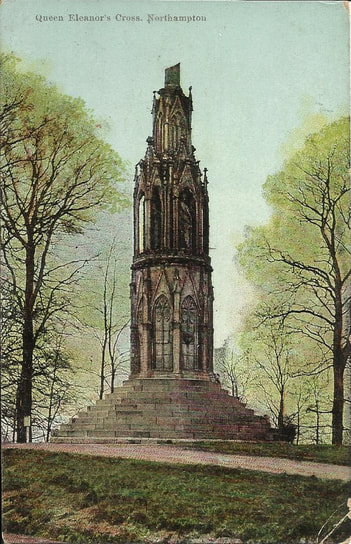 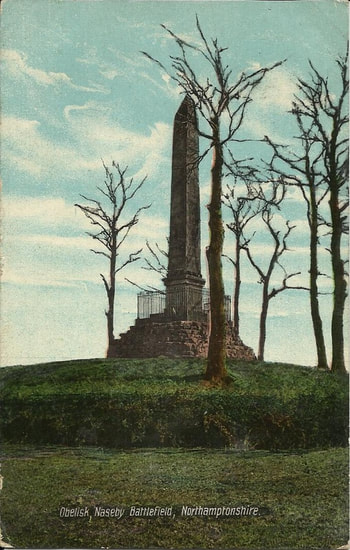 Naseby Obelisk was erected in 1823 for John and Mary Fitzgerald as a memorial to the Battle of Naseby. It is built over a mile away from the battle field on an old windmill mound. 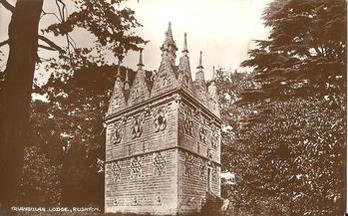 Sir Thomas Tresham, who was the father of one of the Gunpowder Plotters, designed Rushton Lodge and it was built between 1593 and 1597.
There is an inscription 'Tres Testimonium Dant' that is a quote from St John's Gospel meaning, 'there are three that give witness'.
The whole building is an architectural conceit based on the number three, both a reference to the Trinity and a pun on Tresham's name. 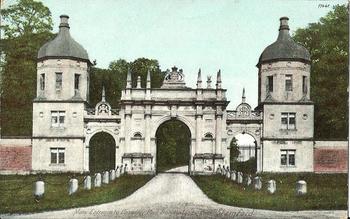 Burghley Lodges was the main gateway to Burghley House and designed by Stamford architect William Daniel Legg (d, 1806) in the Elizabethan style of Burghley House. The Cecil coat of arms are above the carriage arch and the family crests are above the balustrade pedestrian arches on either side. 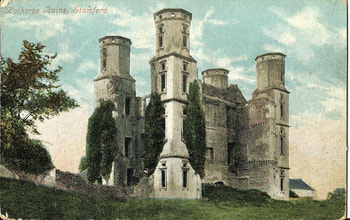 Wothorpe Towers was built in about 1600 for Lord Burghley's eldest son, Thomas Cecil, Earl of Exeter.