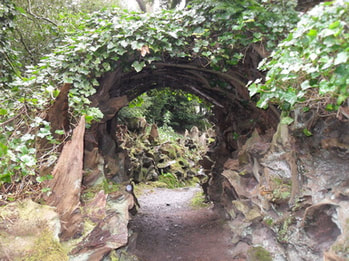 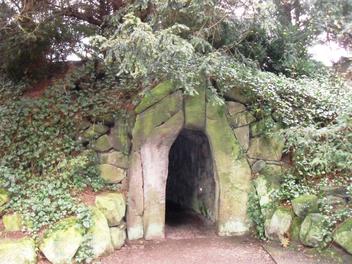 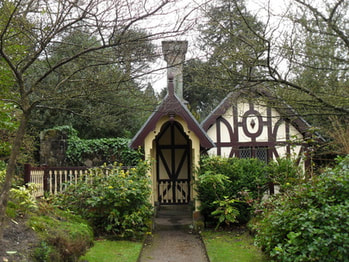 The Cheshire Cottage in the garden of Biddulph Grange is only a façade of the entrance to pass from one part of the garden into another. 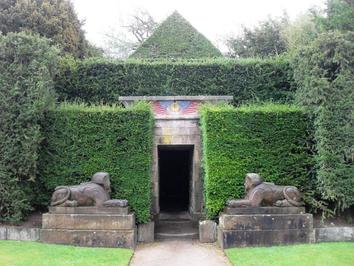 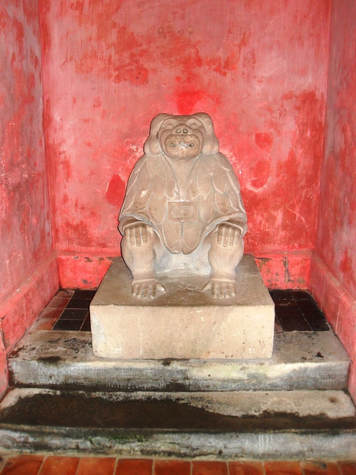 The Ape of Troth

The Ape of Troth is inside the Egyptian Pyramid. 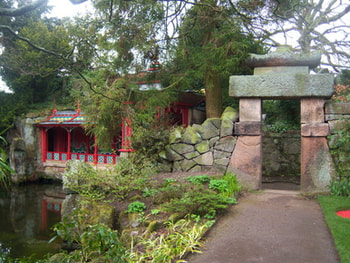 The Chinese Temple and garden at Biddulph Grange is a late example of the fashion in Britain for building in the Chinese style. It was built by John Bateman 1848-1860. 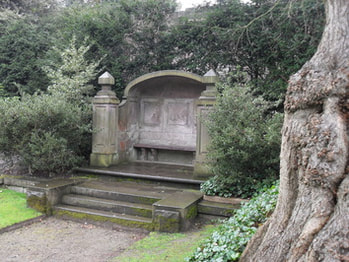 The stone seat at the end of the Lime Avenue was designed by Edward Cooke. 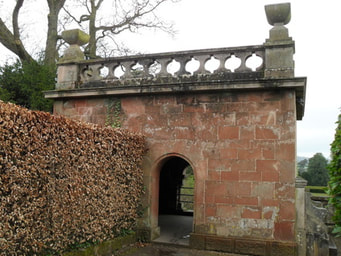 The Shelter House in the garden at Biddulph Grange has been reconstructed by using archaeological evidence and old photographs. 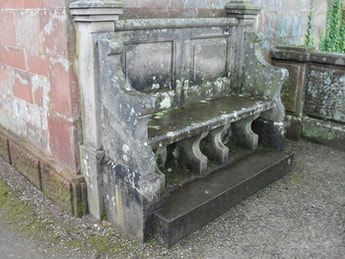 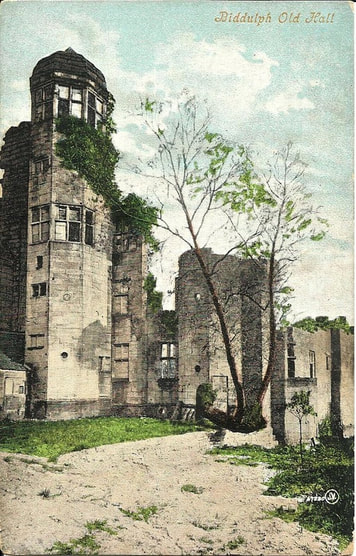 The tower may have been a belvedere. 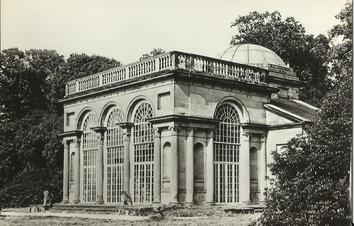 The Temple of Diana at Weston Park was designed by   James Paine for Sir Henry Bridgeman in about 1760 as   an orangery and garden room.

In the circular tea room there are painted panels by   G.B.I.Columbe depicting the life of Diana. The ceiling in   the octagonal music room has a painted trompe l'oeil sky. 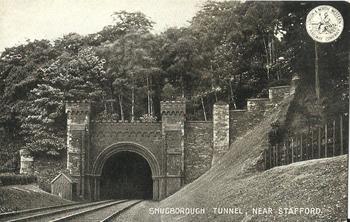 ​Thomas William Anson, the 1st Earl of Lichfield, objected   to a railway line going across Shugborough Park, and so a   750 yard long tunnel was constructed.

The ornamental portals were designed by architect, John   livock in 1847. 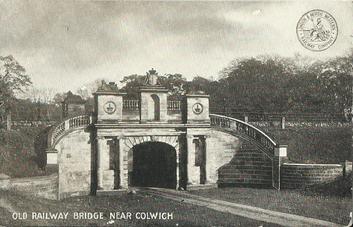 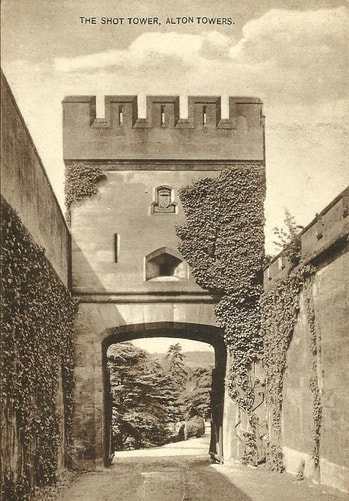 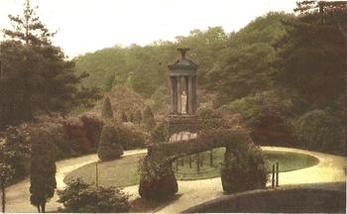 After Charles Talbot, the 15th Earl of Shrewabury, died in 1827, a Choragic Temple was erected with the inscription, 'He Made The Desert Smile'. His nephew, John, who became known as 'Good Earl John', continued to develop the Alton Towers estate.

There are other choragic temples are at;
ALLOWAY Strathclyde 'Burns Monument'
EDINBURGH Lothian 'Dugald Stewart Monument'
TATTON Cheshire 'The Monument' 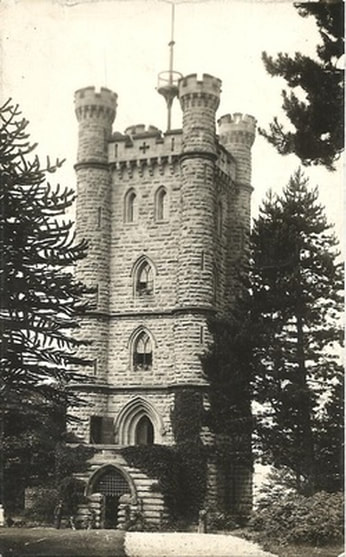 The Gothic styled Flag Tower at Alton Towers was built in the early 19th century. 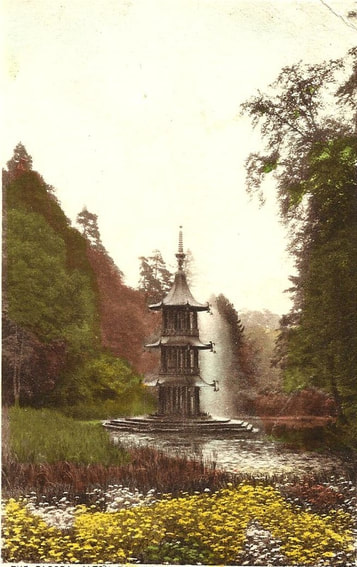 The three-stored Pagoda at Alton Towers is based on the To-Ho pagoda in Canton, it was completed in 1827 and was called the Duck Tower.

It has a 70 feet high fountain. 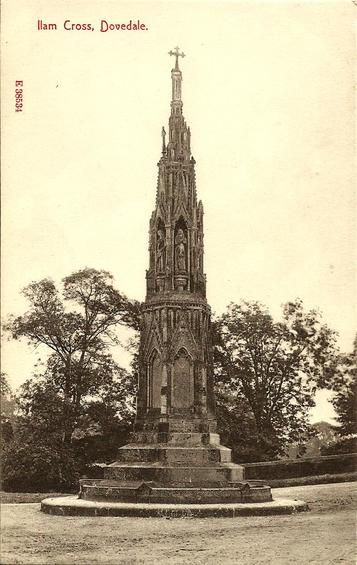 Ilam Cross was built as a memorial to Mary the wife of Jesse Watts-Russell, the squire of Ilam. It was built in 1840 in the style of the Eleanor Crosses, like the one at HARDINGSTONE, Northamptonshire. 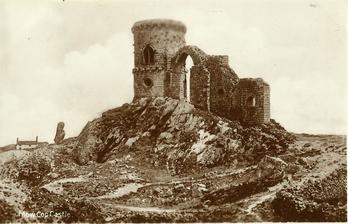 Mow Cop was built for Randle Baker Wilbraham in 1754 as a two-storey summerhouse.

In 1807, the first open-air camp meeting was held at Mow Cop and Primitive Methodism was founded in 1812 after meetings there.
In 1907, it was estimated that about 100,000 people gathered there for the centenary meeting. 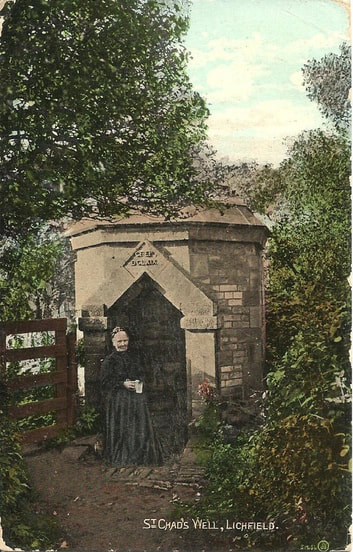 In 669, St Chad became Bishop of Mercia and a spring   at Lichfield was used by him for baptisms.

The well became a centre of devotion and in the 1830s,   James Rawson, a local physician, had an octagonal stone   structure erected over it. It was demolished in 1950 and   the replaced with the present structure.

It is still regarded as a place of pilgrimage.