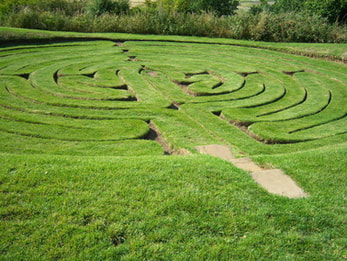 Julian's Bower is a turf maze that was recorded in 1697 by Abraham de la Pryme. It is just below an earthwork known as Countess Close and overlooks the confluence of the River Ouse and the River Trent. 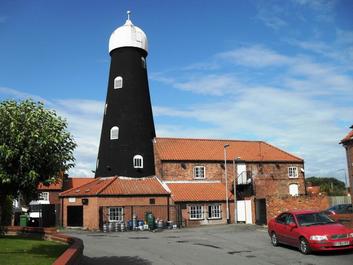 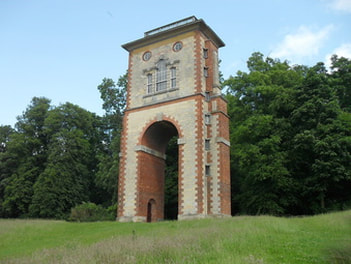 Originally the belvedere, built in 1749, had arched wings, giving it better proportions. On the advice of Philip Yorke to the 1st Lord Brownlow, they were removed in about 1780. Yorke comented:

Belmount may be well clipped its two wings; they are the most offending members, and I think sh'd be cut off'.

The arch became known as 'Lord Brownlow's Britches'.
The tower was damaged by fire in 1841 and was restored about 1989. 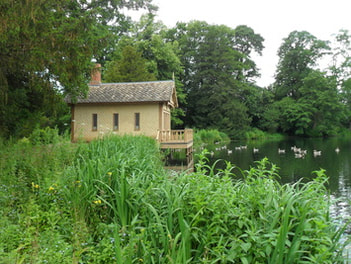 The Boat House at Belton Park was designed in the 1820s by Anthony Salvin for John Cust, the 1st Earl Brownlow.

It is in the style of a Swiss chalet, the walls have basket-weave plasterwork and it has a stone fish scale roof.

The restoration was finished in 2008. 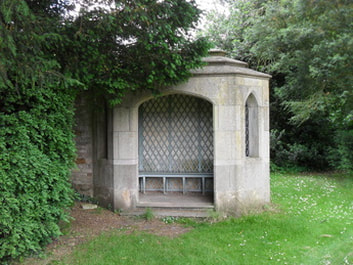 The Gazebo at Belton Park is at the corner of the churchyard and faces Belton House. 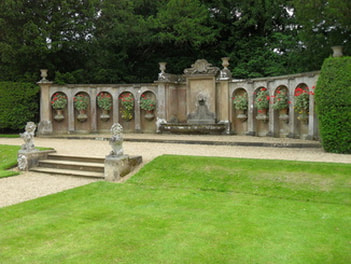 The Lion Exedra at Belton House was designed in the early 19th century by Jeffry Wyatville in the Classical Revival style. 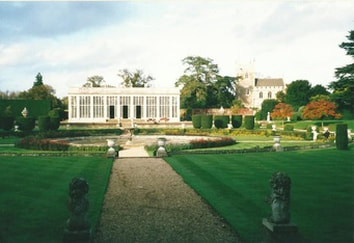 The orangery at Belton House was designed in about 1811 by Jeffry Wyatville in the Classical Revival style and was built in 1821. The Balustrade is made of Coade stone. 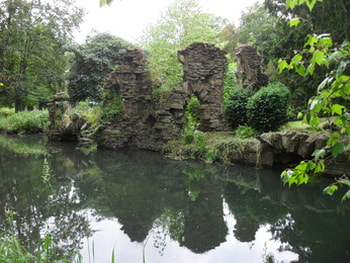 Viscount Tyronnel wrote about the sham ruin at Belton House in 1745 in a letter to his nephew, John Cust:

a grand Rustick arch finished with vast Rough Stones over ye Cascade of ye River, and two Huge Artificial Rocks on either side, Design'd and executed, as I think, in a taste superior to anything that I have seen. 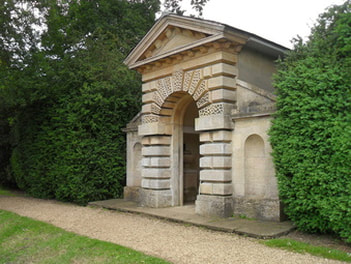 The Palladian style temple at Belton Park was built in the early 18th century.

It was resited to its present position in 1816 and possibly came from Culverthorpe. 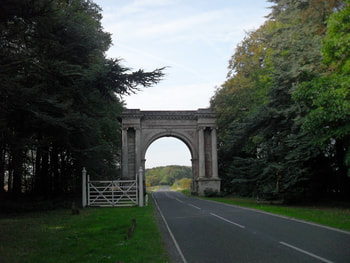 The Brocklesby Memorial Arch was built as an entrance to Brocklesby Park and is dated 1864. On the east side is an inscription that reads:

and on the west side:

BY HIS TENANTS AND FRIENDS 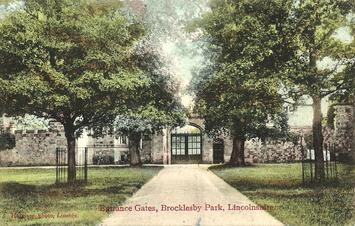 Newsham Lodge was possibly designed by Jeffry   Wyattville. A decretive panel of arms is on the 3rd floor   of the tower and the Anderson cypher is over the   pedestrian entrance.


This image is an Edwardian postcard . 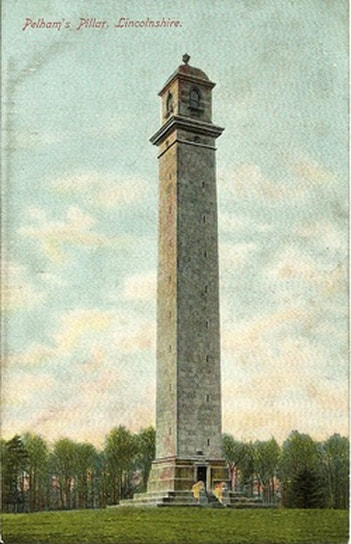 Designed in by Edward James Willson, who was paid 100 guineas for the plans, the 128 feet high Pelham's Pillar was built for Charles Anderson Pelham, 1st Earl of Yarborough, and cost £2395 4s 3d. It was visited by Prince Albert when it was completed. 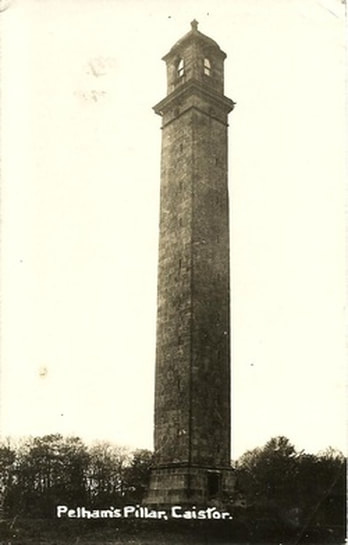 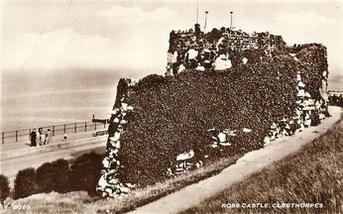 Mr Ross was the financial director of the Yorkshire, Humber and Lincolnshire railway. He had the sham castle built in 1885 as a viewing platform for holidaymakers brought to Cleethorpes by his railway. 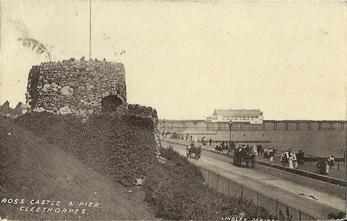 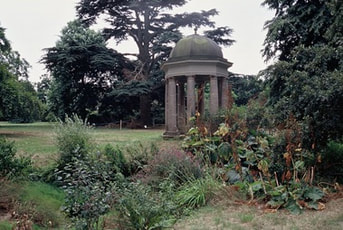 The Tuscan Temple of the Winds

The Tuscan Temple of the Winds is now a memorial to Coney and Ralph Jarvis who both died in the 1970s and created much of the gardens at Doddington. They had built the temple in 1967. 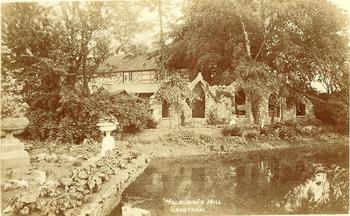 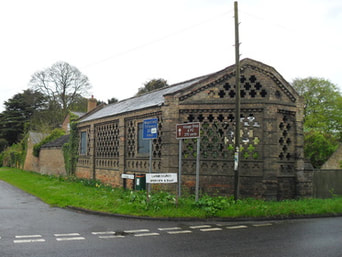 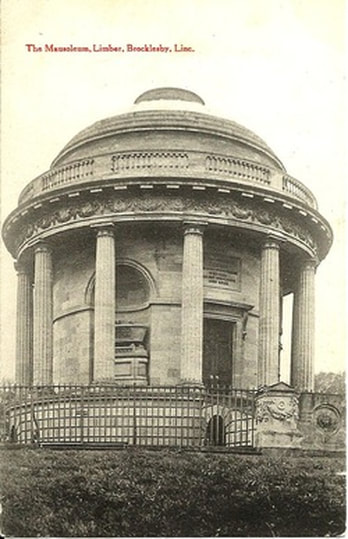 The Mausoleum in Brockleby Park is for Sophia Aufere and was designed by James Wyatt and built in 1792. In the centre of the mausoleum is a white marble figure of Sophia by Joseph Nollekens.

TO THE MEMORY OF
SOPHIA
THE WIFE OF C.A.PELHAM
JAN XXV MDCCLXXXVI
AGED XXXIII


This postcard is Edwardian. 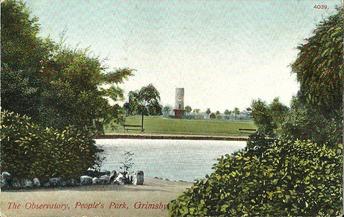 The Observatory was built in People's Park for Queen Victoria's 80th birthday. It was demolished during WW II. 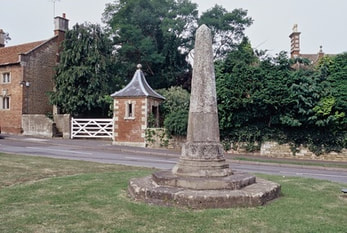 A tiny gazebo is in the centre of Harlaxton village. 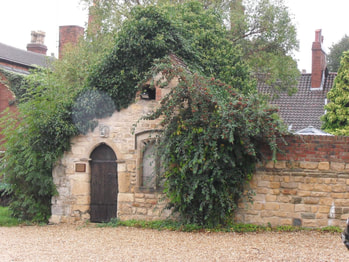 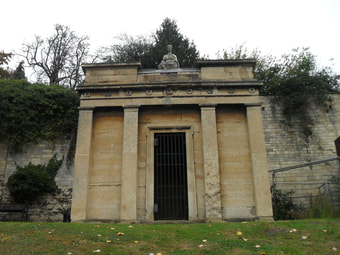 The early 19th century Doric style garden temple was based on the Choragic Monument of Thyrasyllus. On the parapet is a seated figure of Niobe. 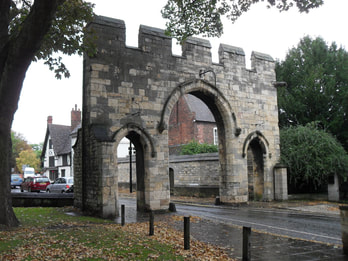 Priory Gate was built in 1816 in the Medieval Revival Style with masonry from the nearby 14th century gatehouse. 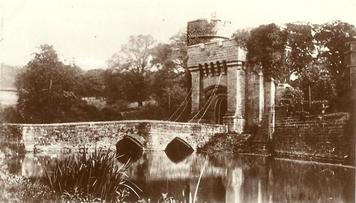 Bayons Manor was built for Charles Tennyson   d'Eyncourt, the uncle of Lord Tennison, from 1836 to   1842. It was designed as a picturesque romantic Gothic   castle by William Nicholson.

After being used by troops in the Second World War it   was sold in 1944 and demolished in 1965. The ruins of   the drawbridge still remain. 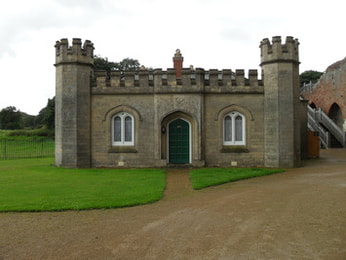 Just inside the impressive gatehouse of the ruins of Thornton Abbey is a little Gothic building. 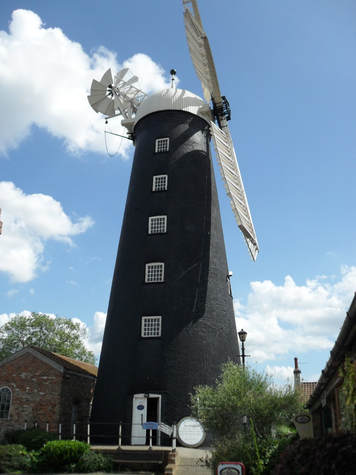