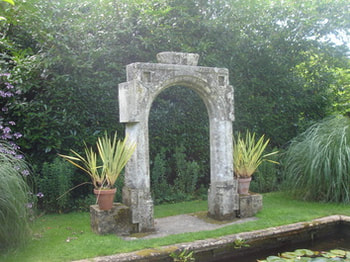 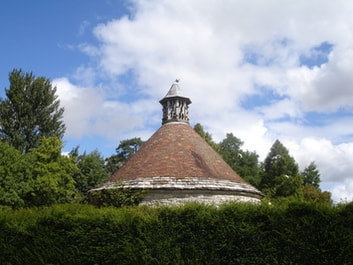 The dovecote at Athelhampton dates back to the early 16th century and has about 600 pigeon-holes. It is 25 feet high and 22 feet in diameter. 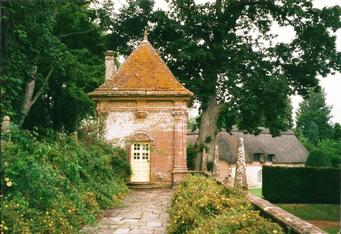 Francis Inigo Thomas designed two pavilions and the South Terrace at Athelhampton for Alfred Cart de Lafontaine in the 1890s. One, with a smiling face over the door, is called the House of Joy or the House of Summer, and the other is known as the House of Sorrow or the House of Winter and has a face surrounded with icicles.
The Pavilions originally had water tanks to supply the fountain. 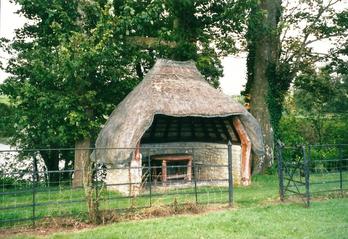 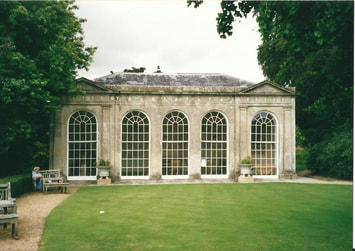 The Orangery was built between 1779 and 1781 and was known as the Greenhouse. 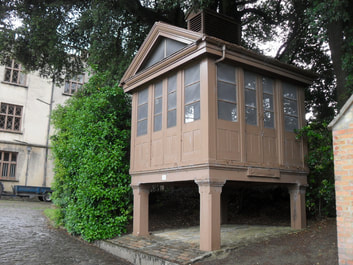 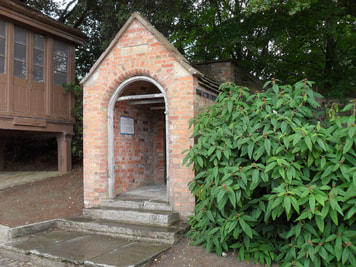 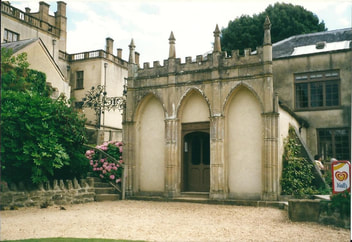 The Gothick style dairy was built in 1756, and still has stone thrawls.

The 4th century Roman mosaic pavement was discovered in 1834 at Leathray Common, on the outskirts of Sherborne, and then reset in the dairy floor in 1836. It depicts Apollo playing a lyre and Marsyas playing a double flute. 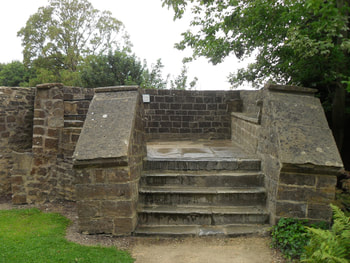 Walter Raleigh acquired Sherborne Old Castle in 1592 and built Sherborne Lodge nearby. Raleigh's Seat was built on the perimeter wall as a viewing platform, and tradition has it that it is where he was drenched with water by a servant to extinguish his pipe. 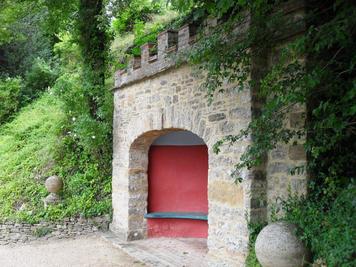 Alexander Pope, a friend of owner Robert Digby, visited Sherborne Castle in 1724 and wrote a description of the gardens mentioning a 'rustic Seat of stone'.

It is thought that Henry Holland designed the present alcove in 1778, and it became known as Pope's Seat. 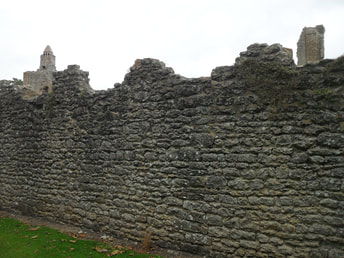 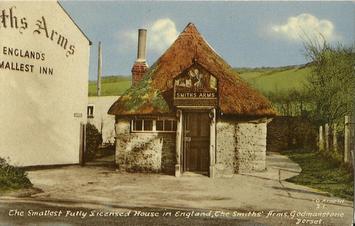 The Smith's Arms, said to be the smallest pub in   England, was originally a blacksmith's forge dating back   to the 15th century. King Charles II stopped here to   have his horse shod, but when he asked for a drink, the   blacksmith replied, 'I have no license sir'. So the king   granted him one. 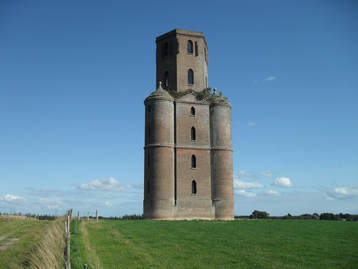 The 140 feet high tower at Horton was built by Humphrey Sturt about 1722. He probably intended it to be an observatory and hunting stand.

an artificial piece of water of two hundred acres and an elegant turret 140 feet high; but such a nature is the man that he keeps his place in no order, sells his fish, and makes a granary of his turret. 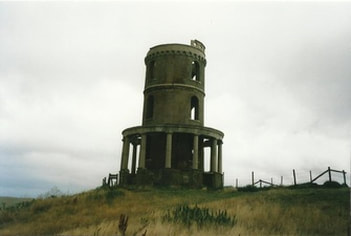 The tower was built in 1820 by Rev John Richards, who inherited the Smedmore Estate and added Clavell to his name.

The photograph shows the tower almost falling into the sea, but it has now been moved further inland and is a Landmark Trust holiday let. 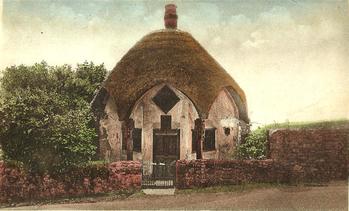 Also known as the Mushroom Cottage, the early 19th century 'cottage orne' was once a gardener's cottage.

​There is another Mushroom Cottage at Hornsea, East Riding. 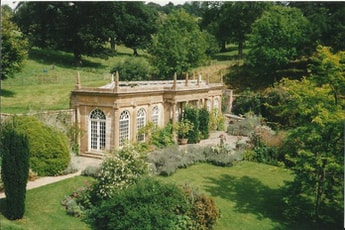 The neo-classical orangery at the Italianate Mapperton Gardens was built for Victor Montagu in 1970. 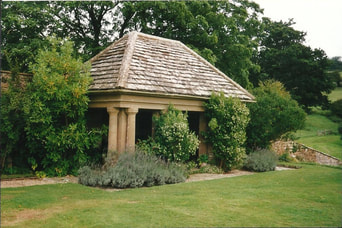 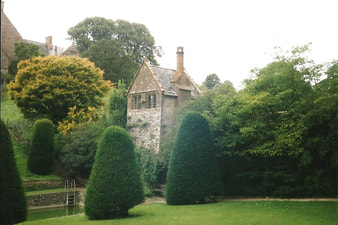 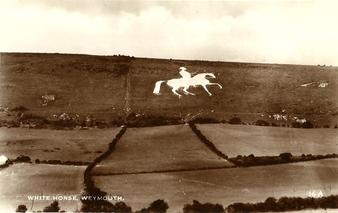 The hill figure was cut into the chalk of Osmington Hill in   1808 and is 280 feet long and 323 feet high. It is said to   represent King George III who visited Weymouth on his   horse, however he may have been annoyed as the rider is   facing away from the town. 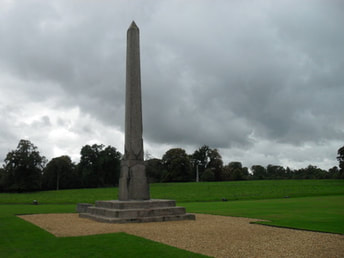 The Egyptian Obelisk at Kingston Lacy was first erected about 150BC by priests on the island of Philae to record their exemption from taxes. Its base was inscribed with the names, in Greek, of PTOLEMY VII and his sister CLEOPATRA, and the obelisk was decorated with the names of kings and gods. The Philae Obelisk played a role, along with the Rosetta Stone, in deciphering the hieroglyphs. 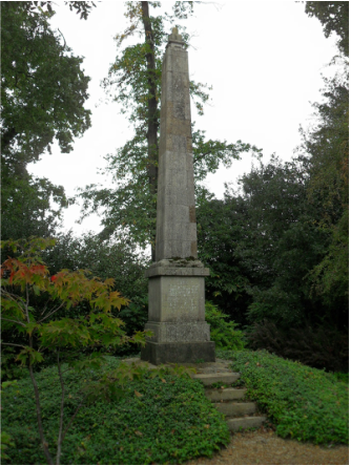 The obelisk, dated 1887, commemorating Queen Victoria's jubilee is one of the three obelisks at Kingston Lacy. 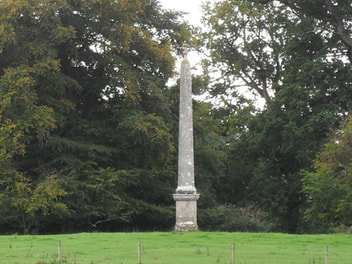 The obelisk at Kingston Lacy near the ha-ha has no inscription and is probably 18th century. 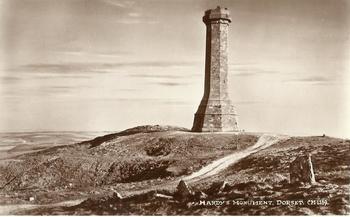 The 70 feet high monument to Admiral Hardy was designed by A.D.Troyte and built in 1844. Perhaps the public subscribers were disappointed by its factory chimney-like appearance, but it does have a spiral staircase and the views from the top are stunning. It commemorates, 'Admiral Sir Thomas Hardy Bart, CCB, Flag Captain to Lord Nelson on HMS Victory at the Battle of Trafalgar'. 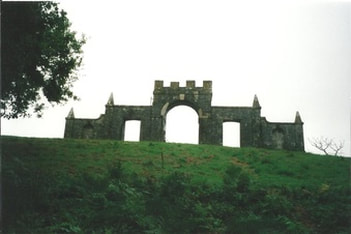 Dennis Bond, of Creech Grange, had an eyecatcher built in about 1746 to be seen from his house.

The Bond family must have had an eye for fashion, as they had developed Bond Street in 1684. 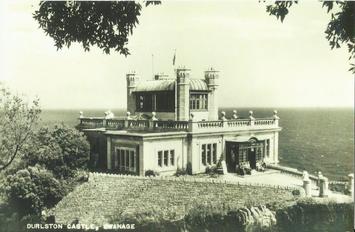 Durlston Head Castle was built for George Burt in 1887   as a restaurant for a holiday complex.

It has recently undergone extensive restoration and is   now a restaurant once more. 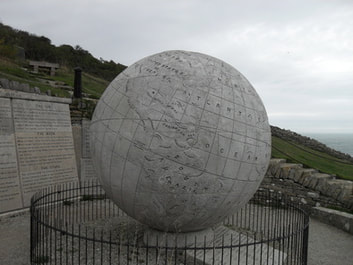 The large Globe is one of many follies that George Burt made in the late 19th century. It weighs 40 tons and is 10 feet in diameter. 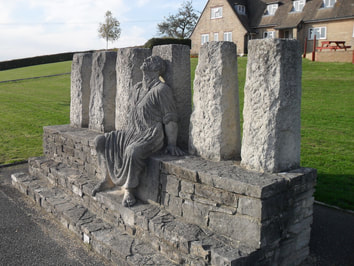 The sculpture is of George Loveless awaiting transportation to Australia to join the other five Tolpuddle Martyrs but too sick to travel. 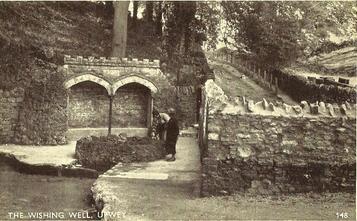 In 1212 the parish was known as Helewell, which meant   'healing well'.

King George took the waters there.

The wellhead, the springhead of the River Wey, was built   in the 19th century and was rebuilt in 1991. 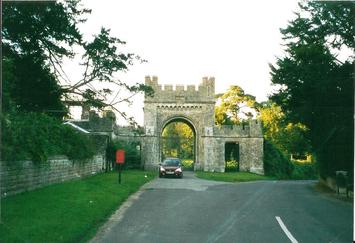