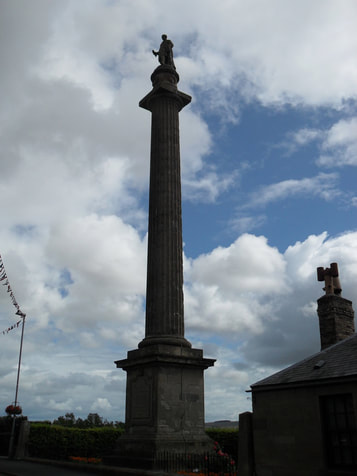 The column at Coldstream was erected to celebrate the victory of the Independent and Liberal Party in the 1830 election.

The statue of Charles Marjoribanks was replaced in 1873 after the original one was struck by lightning. Part of the statue known as 'Old Charlie's Leg' is on display at Coldstream Museum.

​Marjoribanks was MP for Berwickshire after the Reform Act of 1832. The inscription says he was a man of 'high talents, amiable qualities and political principles'. 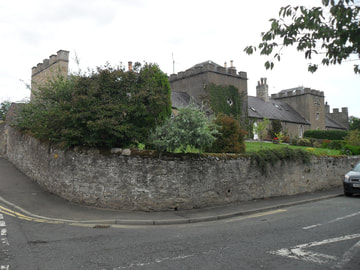 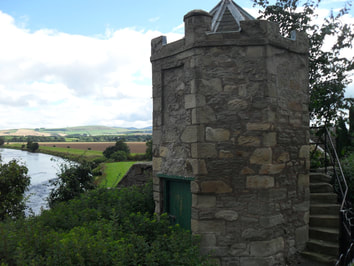 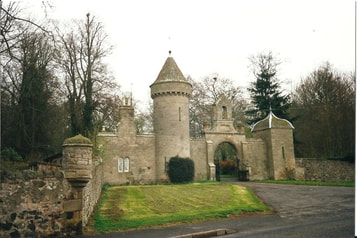 The South Lodge entrance to Duns Castle was built in the early 19th century in an asymmetrical French Gothick style, probably by an amateur architect. 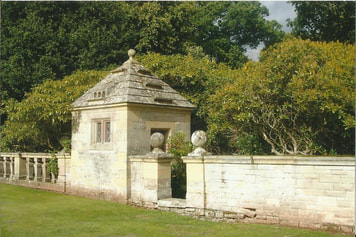 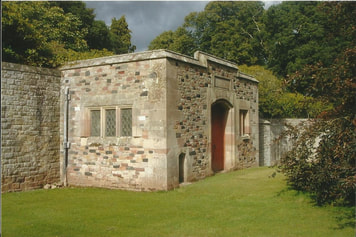 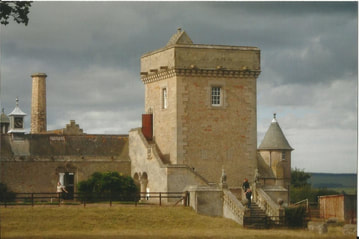 Most of the buildings in Buxley, a hamlet attached to Manderston House, were designed between 1897 and 1900 by John Kinross for the owner, Sir James Miller, 2nd Baronet.

​The Dairy tower is dated 1900 and is in the style of a Pele Tower. 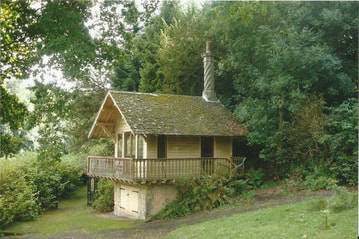 The boathouse was designed by John Kinross for Sir James Miller in the style of a Swiss chalet, and built in 1894 to celebrate Miller's engagement to Eveline Curzon. 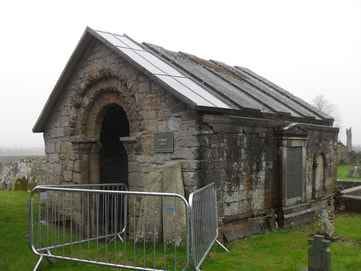 In the graveyard of Edrom Church is the Logan Vault        incorporating the Norman Arch of the original church,      which was rebuilt in 1737. 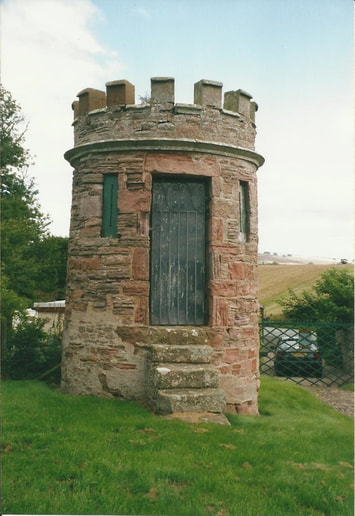 The 12 feet high tower was built in the early 19th century as a watch-house to protect the graveyard from potential body-snatchers.


There are also watch-houses at; 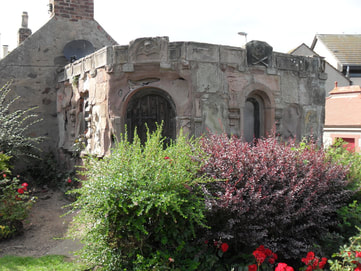 The watch-house was built in the graveyard in 1849 using fragments of tombstones, some of which have elaborate carvings.

There are also watch-houses at; 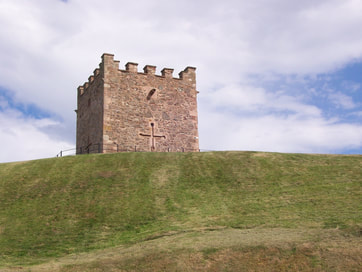 The early 19th century square dovecote has battlements on three sides with stone cannon barrels projecting from the walls and blind crosslets on the north and east sides. It was used as a cart shed.

It has now been converted into holiday accommodation called Nisbet's Tower. John Nisbet was a smuggler who built Gunsgreen House in 1753. 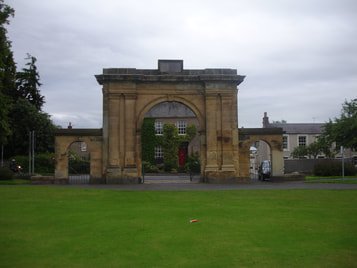 The gateway to Shedden Park is a Triumphal Arch erected in 1852 as a mark of gratitude for the gift of the park by Mrs Robertson in memory of her nephew, Lieutenant Robert Shedden. Sheddon died in the search for Sir John Franklin's team who were trying to find the 'North-West Passage'. 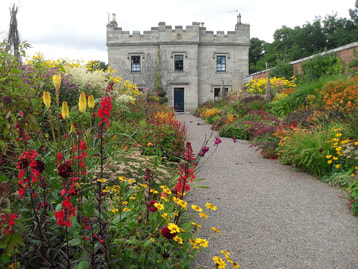 The castellated Head Gardener's Cottage at Floors Castle dates back to 1815.

The kitchen garden was laid out in 1857, under the supervision of Mr Rose.

The little Pavilion to the east of the walled garden is all that survives of a line of glasshouses known as the 'Tropical Corridor' that had a 300 feet long path. 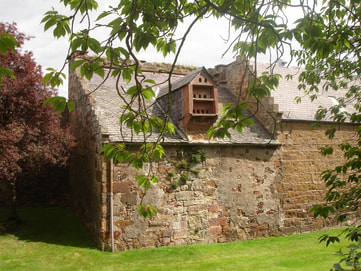 An early 18th century doocot is attached to a 19th century byre range. 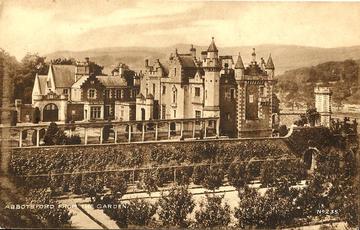 The arched screen at Abbotsford House was probably designed by John Smith of Darnick in 1824 as part of Sir Walter Scott's Romantic landscape, and inspired by the cloisters at Melrose Abbey. 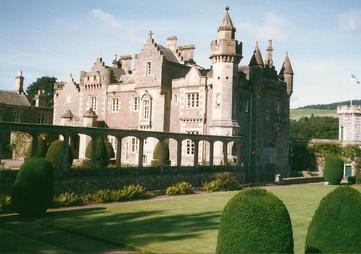 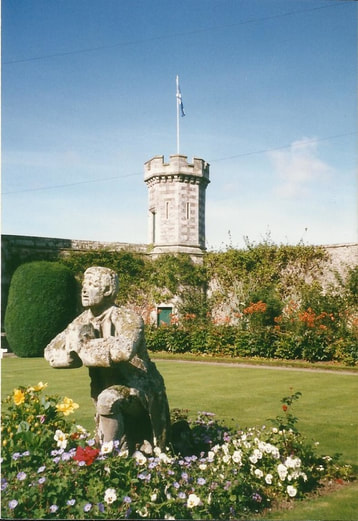 In the East Court at Abbotsford is a turret built into the wall.

The stone figure was presented to Abbotsford after Sir Walter Scott had died. It represents Morris asking mercy from Helen Macgreger (Rob Roy, chap. 31). The unfinished sculpture was by John Greenshields. 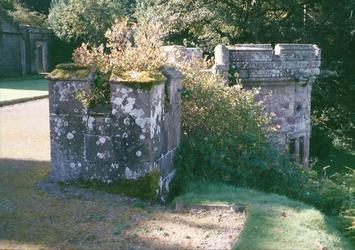 John Smith of Darnick designed the castle-like game larder at Abbotsford in 1851.

Inside is a wooden game hanging device in the shape of a pineapple. An underground passage connects it to the kitchen. 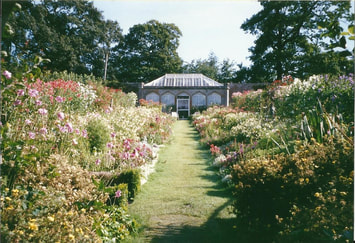 At Sir Walter Scott's home of Abbotsford is a Gothic-style orangery that he designed with John Smith in 1823. 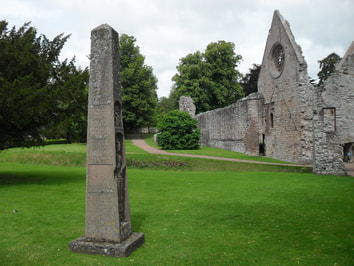 Two sides of the obelisk to the south of Dryburgh Abbey, have carvings of King James I and King James II. On another side is a relief of the founder of the abbey, Hugh de Moreville. The fourth side is inscribed:

'Erected by the right Hon David Steuart Erskine the Earl of Buchan to the honour of his ancestors 1794. The figures were cut by George Burnet in Newstead and the lettering by D. Forson in Dryburgh by order of David Erskine.' 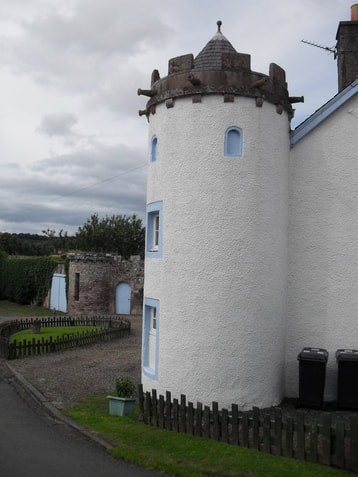 The battlemented Stirling Tower, with projecting cannons, was built in the early 19th century for the 11th Earl of Buchan as part of his Romantic landscape at Dryburgh. 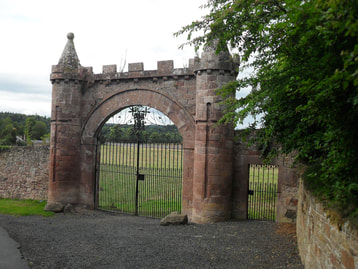 The Orchard Gate, with battlemented parapet and piers with incised crosses, was erected for the 11th Earl of Buchan in the early 19th century as part of his Romantic landscape. It was the entrance to the orchard as a memorial to his parents and the Latin inscrption translates as:

The Orchard was planted by his own hands by the         Earl of Buchan, in honour of his excellent parents. 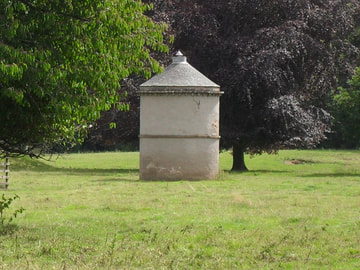 The Dryburgh Abbey Doocot is dated 1828 with the initials D. E. It was a component of David Erskine's Romantic landscape. 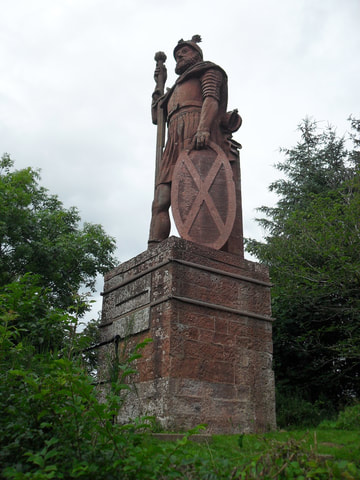 Wallace on the Hill

The 20 feet high plinth and statue of Sir William Wallace in Roman costume was made by John Smith and was erected in 1814 for the Earl of Buchan.

The inscription on the plinth reads:

​There is an ornamental urn nearby. 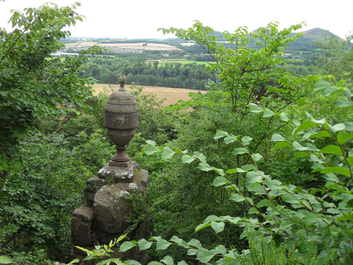 The urn at the side of the Wallace on the Hill statue is inscribed:

The peerless knight of Ellerslie
Who waved on Ayr's romantic shore
The beamy torch of liberty
And roaming round from sea to sea
From glade obscure to gloomy rock
his bold compatriots called to free
This realm from Edward's iron yoke.

In 1298, Wallace was proclaimed 'Protector of Scotland'. 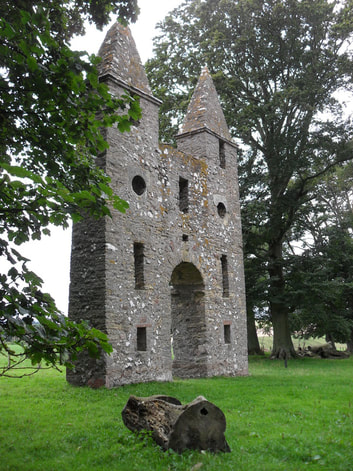 William Adam built Hundy Mundy for the Hon. George Baillie as an eycatcher from his house at Mellerstain. The stone is said to have been reclaimed from an old tower house on the site, which was occupied by a Pictish princess called Hunimundias. Alternative, the name may be a corruption of a classical Greek word.

The 12th Earl of Haddington named a horse Hundy Mundy. 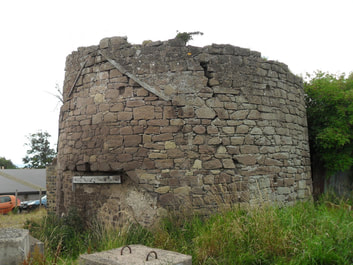