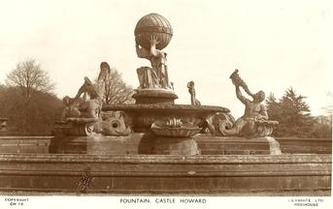 The Atlas Fountain was designed by William Andrews Nesfield in 1850. The Portland stone figures were made by John Thomas, who was paid £1183/10s/3d.

Before the fountain was installed at Castle Howard it was exhibited at the Great Exhibition of 1851.

The globe that Atlas is holding has the signs of the Zodiac and was bought by the Howard family at the Paris Great Exhibition of 1889. 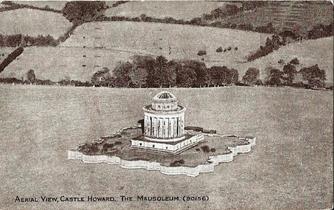 The huge mausoleum at Castle Howard was designed by Nicholas Hawksmoor but was unfinished when he died in 1736. Daniel Garrett added the fortified wall around the base.

Horace Walpole wrote: 'a mausoleum that would tempt one to be buried alive'. The 3rd Earl of Carlisle was buried there, but after his death. 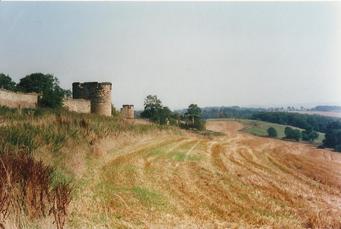 The 2,000ft long wall with 11 towers is said to be Britain's longest folly. When John Vanbrugh designed the ramparts he may have had in mind the walls of Chester that were damaged during the Civil War. 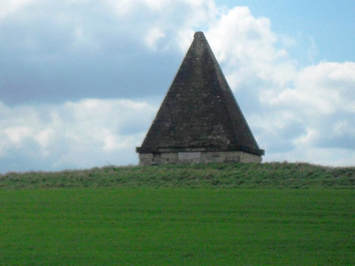 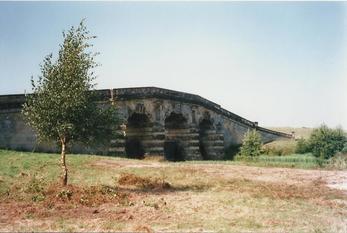 The New River Bridge at Castle Howard was designed by Daniel Garrett for Henry, the 4th Earl of Carlisle, in about 1740. 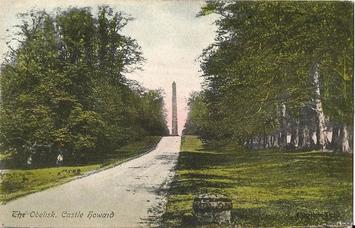 The 100 feet high obelisk at the focal point of the approach road to Castle Howard was designed by Nicholas Hawksmoor and is dated 1714. It celebrates the accession of George l and also the achievements of the Earl of Carlisle. 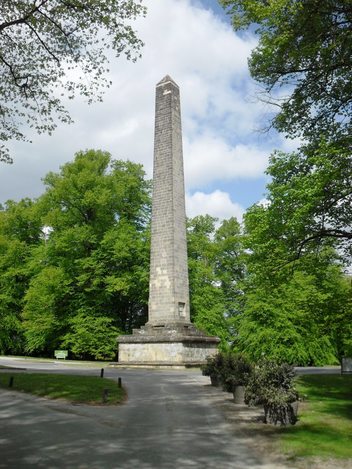 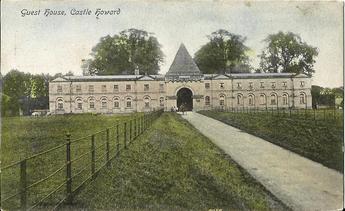 Designed by John Vanbrugh in 1719, the Pyramidal Gate was the entrance to the old deer park. The wings, built in the 1750s as a hostelry for visitors, detracts from the effect of the mighty triumphal arch. 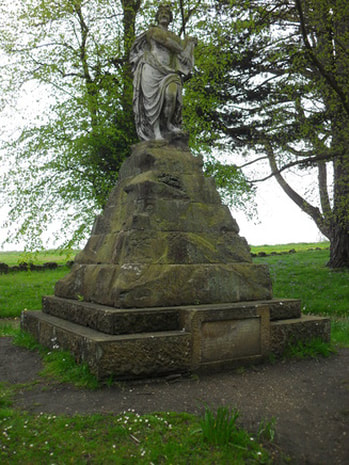 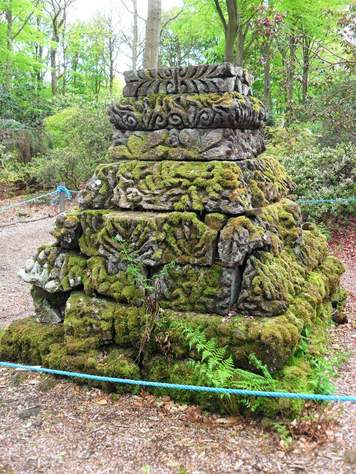 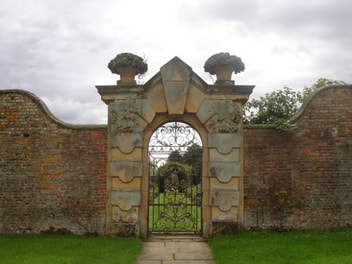 The Satyr Gate is the entrance to the kitchen garden at Castle Howard. The unusual heads and baskets of ornamental stone flowers were carved by Samuel Carpenter of York. 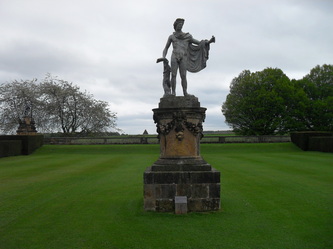 'Apollo, the Roman god of the sun, learning
and the arts. So called after the famous marble
version in the Belvedere Courtyard in the
Vatican Museum.

Lead version supplied by either John Nost or
Andrew Carpenter, before 1730. 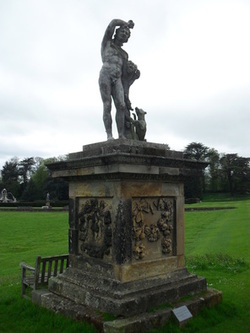 'The Roman god of wine, here depicted with a
bunch of grapes in his hand. 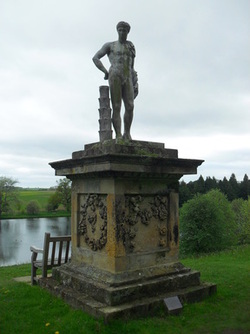 'Said to represent the beautiful Greek youth who
was the Emperor Hadrian's favourite. So called
after the marble version in the Belvedere
Courtyard in the Vatican Museum. 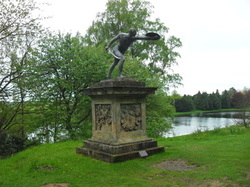 'Also known as the Roman or Fighting Gladiator.
So called after the marble version once in the
Villa Borghese, now in the Louvre, Paris. 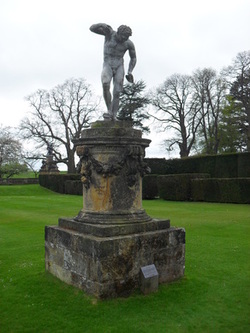 'A young boy holding a pair of cymbals and
pressing down on a scabellum, a type of castanet
operated by the foot. After the marble version in
the Uffizi Gallery, Florence. 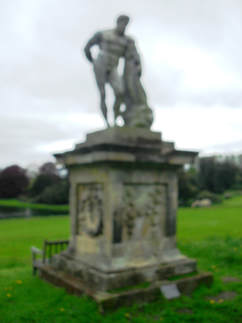 The famous hero of antiquity renowned for his
huge strength, and for Twelve Labours he
undertook. So called after the marble version
once in the Palazzo Farnese Rome, now in the
National Gallery Naples.

Lead version supplied by Andrew Carpenter in 1723 at a cost of £21. 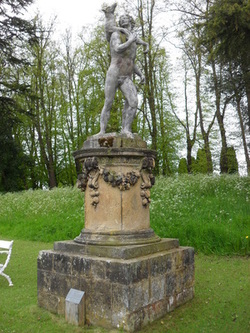 'A young boy carrying a baby goat on his
shoulders. Sometimes known as the Queen of
Sweden's Faun, after the marble version once in
her collection but now in the Prado, Madrid.

Lead version supplied by Andrew Carpenter in
1723 at a cost of £21. 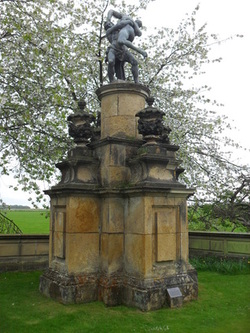 'This double statue depicts the legendary
struggle between Hercules and the giant
wrestler Antaeus. Because Antaeus grew
stronger every time he touched the ground
Hercules had to squeeze him to death while
holding him in the air. This statue, commissioned
in 1999-2000, is a new copy of the 18th-century
lead version that disappeared in the 19th century.' 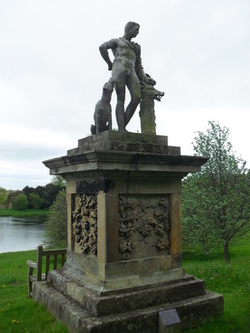 'A famous hunter who slayed the huge Calydonian
Boar. He is traditionally depicted with his faithful
hound and the head of the boar he has just killed.
After the marble version in the Vatican Museum. 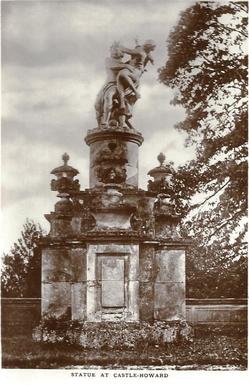 'this double statue depicting the legendary abduction
of Proserpine, who was carried into the underworld
by Pluto. She was allowed to live on earth for six
months of the year on condition that she remained
in the underworld for the other six; this became the
mythical basis for the seasons. Below the
struggling figures sits Cerberus the tree-headed
dog of Hades.

This statue commissioned in 2000-2003, is a new
copy of the 18th-century lead version that
disappeared in the 19th century.' 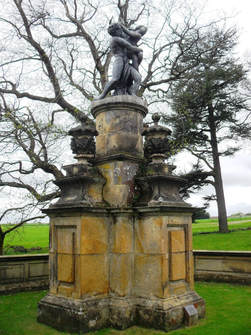 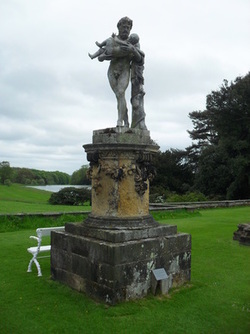 Lead version supplied by either John Nost
or Andrew Carpenter, before 1730. 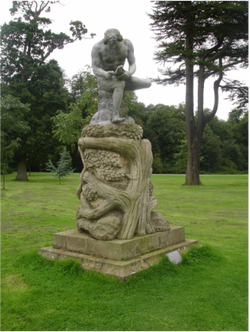 The statue of Spinario, the shepherd boy who delivered a message to the Roman Senate and only stopped to remove a thorn after he had delivered it, was sculpted by Andrew Carpenter in 1723. It was copied from a Roman original that is in the Capitoline Museum in Rome.

The statue was restored in 1995 and placed on a new plinth. The original pedestal was by Nicholas Hawksmoor.

​There is a similar statue of the Boy with Thorn at Prideaux Place at PADSTOW, Cornwall.