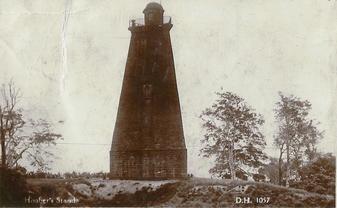 Hoober Stand was designed by Henry Flitcroft in 1747 for Thomas Watson Wentworth, 1st Marquis of Rockingham.

Above the doorway is the following inscription, composed by Rockingham:

THIS PYRAMIDALL BUILDING WAS ERECTED BY HIS MAJESTYS   MOST DUTIFUL SUBJECT THOMAS MARUESS OF ROCKINGHAM IN GRATEFUL RESPECT TO THE PRESERVER OF OUR RELIGIOUS LAWS AND LIBERTYS KING GEORGE THE SECOND WHO, BY THE BLESSING OF GOD HAVING SUBDUED A MOST UNNATURAL REBELLION IN BRITAIN ANNO 1746 MAINTAINS THE BALANCE OF POWER AND STTLES A JUST AND HONOURABLE PEACE IN EUROPE 1748 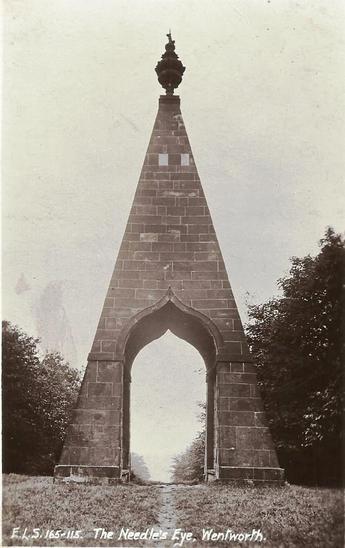 The Needle's Eye may be the earliest monument on the Wentworth Woodhouse estate and be part of its Baroque design period. It is on the axis of an avenue to Wentworth Park North Lodge. In a document of building expenses between 1722 and 1723, there is a reference to 'an obelisk in Lee Wood'. It is clearly shown on an engraving of about 1730.

With such strong evidence that the monument existed long before the 2nd Marquis of Rockingham made his a bet, in 1780, that he could drive a horse through the eye of a needle, it could not have been designed by John Carr at that time.

​There is another Needle's Eye at
HUNTWICK WITH FOULBY AND NOSTELL