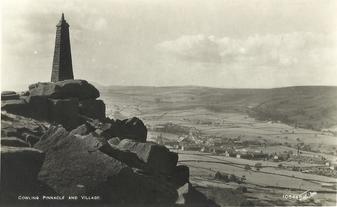 Cowling or Wainman's Pinnacle is on the border of Sutton and Cowling parishes. The original monument may have been erected for Richard Wainman in 1815 either as a memorial to his son who was killed in the Napoleonic Wars or as a monument to the Battle of Waterloo. Alternatively it could have been built by Lady Annacotts who was married to a Wainman of Carr Head who had died in the Civil War. It was damaged by lightning in 1870 and rebuilt just over the Cowling border in Sutton parish by Messrs Bancroft and Gott in 1898 for Mr Hall-Watt of Carr Head.