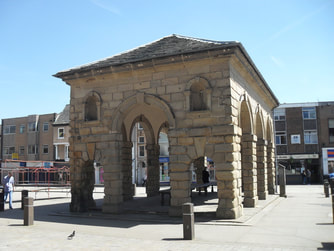 A plaque on the market cross at Pontefract is inscribed:

'Erected by Mrs Elizabeth Dupier, Relict of Solomon Dupier, Gent, in a cheerful and generous compliance with his benevolent intention. Ano Domi 1734.'

Originally it had a flat roof and a stone balustrade that was replaced in 1763 by a pitched roof.

In 1776 John Nutt sold his wife to Mr Ryder for five shillings at the Buttercross. 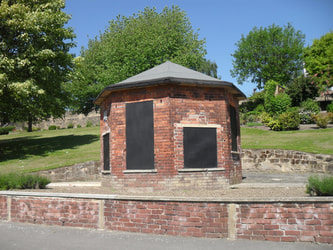 A gazebo that was once a garden feature was made into an aviary when Friarwood Valley Gardens were laid out in 1950.

The Friends of Friarwood Valley Gardens are hoping to convert the derelict building into a camera obscura. 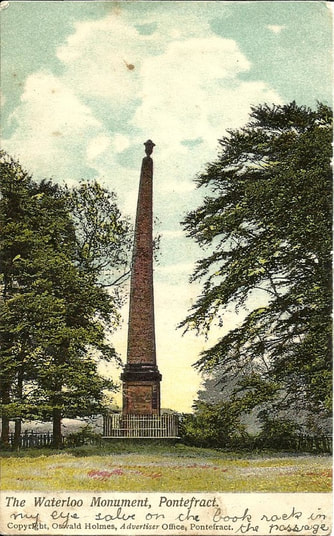 The Waterloo Monument was erected in the grounds of The Grove, the home of Edward Trueman and built of brick by a mason called Heseltine. It bore the inscription:

'This monument was erected September, 1818, in commemoration of the splendid and decisive victory of Waterloo, achieved by British valour under the immortal Wellington, June 18th, 1815.'

Edward Trueman was a partner in the Quaker bank of Leatham and Tew (now Barclay's Bank) and was Mayor of Pontefract five times. The monument was thought to have been a memorial to his son who was killed in the battle. To be a partner in the bank, Trueman would be expected to be a Quaker, however, it is very unlikely that a Quaker would have had a memorial built commemorating warfare.

Waterloo monument became known locally as Cranky Pin because of its lean. During a heavy gale in about 1943 the solid stone urn crashed to the ground. It was presented to the town by Mr C Pease, on whose ground the monument stood. 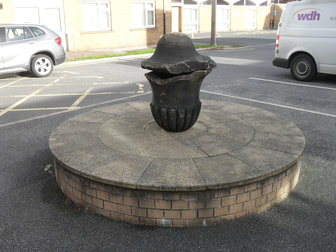 In about 1946, Waterloo Monument was demolished to   make way for a new Council house estate on the site of   Monument Lane. It is thought that the urn was preserved at   Monument House, an old people's home which was built on   The Circle at Chequerfield.

In December 2008, contractors upgrading Monument   House, now known as Monument Mews, discovered the urn   and it is now displayed in the car park.