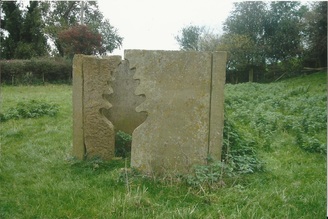 Enclosure is one of the Masham Leaves installations by sculptor Alain Ayers, in the early 1990s. He wrote:

“On the far side of Masham from the ‘Tree’ is a sculpture made from five slabs to form an enclosure. There is an interest in keeping rare breeds here and with the Masham Sheep Fair rooted in the annual event of sheep sale and the movement of sheep from the surrounding Dales to the Market Square there are vivid recollections of sheep and pens everywhere. Masham even gives its name to a breed of sheep.

The sculpture echoes the idea of hill and moorland sheep enclosures but also suggests a link to the Enclosure Acts during the C17 [sic?] and C18 centuries, when lands previously held in common were fenced and transferred to the ownership of farms and estates.

The ‘Enclosure is also a gateway placed at a point on Burnholme not far from a ‘green road’ which may well have been a drovers road. It is placed by a row of ash trees, two of which have been recently felled due to age and storm damage.

Two ash trees have been planted to coincide with the Masham leaves and will inform the idea of the ‘gateway’ looking out across to Swinton Castle. From here you can see the transition of land use from estate parkland to fields, forestry and land at Nutwith to the south-west of Masham. It shows land use evolving and how estate management has shaped and conditioned the look of ‘landscape’. It is a place where the notion of landscape may be considered along with how land use is now undergoing a kind of revolution as significant as the Agricultural Revolution.” 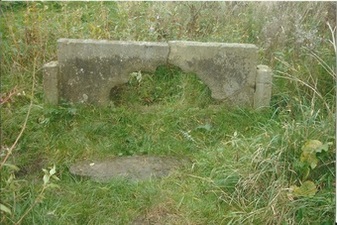 Floating Leaf is one of the Masham Leaves installations by sculptor Alain Ayers, in the early 1990s. He wrote:

“In Autumn 1990 at Sandy Bay on the banks of the Ure watching wind blown oak leaves scatter and float down river, a way of working emerged which could connect each sculpture and place.

On the old Ordnance Survey maps, which always reveal a wealth of information, a ferry crossing is marked near Sandy Bay and you can see how a footpath coming across the fields from the square at Masham linked this. If you expand the view, footpath link to the south at Fountains Abbey and Jervaulx to the north taking in farms, settlements and houses.

A floating leaf sculpture at Sandy Bay refers to the river crossing and to the relationship of time and nature. The ‘floating leaf’ here is a symbol of time stopped’ cut or fallen from the ‘gate’. This becomes a place to consider the river - to sit and watch all the condition which are present. The river crossing, by ferry, was once regularly used by domestic servants journeying between Masham and Alburgh [sic] Hall on the north bank.

The idea of timeless travel and knowing your way by the way it unfolds at walking pace is kept alive by the footpaths. Gradually other sites become apparent, falling into the circular walk and maintaining a balanced spacing.” 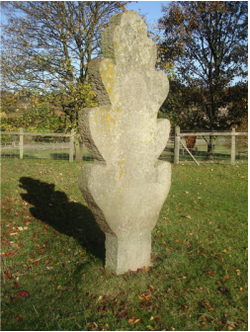 Tree is one of the Masham Leaves installations by Sculptor Alain Ayers, in the early 1990s. He wrote:
“The standing ‘tree’ in the field behind the Church in some ways seems central though it is properly placed if seen as part of the group. The carving of the ‘tree’ sets up a dialogue with the Anglian cross shaft, now severely weathered, by the Church door and the stone fragments inside the Church. The circular carving on one side contains barley seed and a sun-like pattern based on a mill wheel and furrowed like ploughed fields. The Theakston Brewery at Masham is well known and toward the river the old mill is visible. The other side is incised with the linear pattern of a bell ringing score - an image which struck me with the same character as knotwork and a Tree of Life with roots and branches echoing the sound of bells. The specific location was realised when snow had fallen, making the actual path walked across the field quite visible and the way the slight mound would enable the sculpture to hold its space. Sheep are kept in this field, as well as horses.”