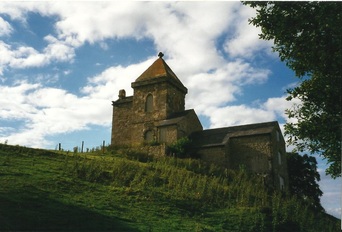 How Hill Tower is just to the south of Fountains Abbey. It was the first of John Aislabie's garden buildings and built in 1719. He designed his garden at Studley Royal in alignment with vistas and How Hill is a prominent landmark. It was used as a gaming house in 1737.

Legend has it that it was from How Hill that the devil fired arrows towards Boroughbridge, which are the Devil's Arrows there today.

There are earthworks on How Hill that show that it was once a defended site.

It is thought that there was a chantry Chapel of St Michael de Monte, which dated back to about 1200 and this was rebuilt by Abbot Huby in the period 1445 to 1526.