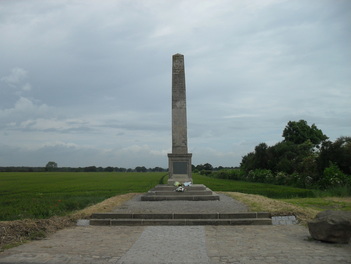 The obelisk was erected in 1939 by the Cromwell   Association to mark the site of the Battle of Marston   Moor. The monument was the idea of Isaac Foot, co-   founder of the Cromwell Association and Liberal   politician, who used to say 'I judge a man by one thing.   Which side would he have liked his ancestors to fight on   at Marston Moor?'

The battle was fought on 2nd July 1644 and is thought   to have been the largest battle on English soil. The allied   army of Parliamentary and Scots Covenanters lost about   300 troops and Prince Rupert's army lost about 4,000   men.