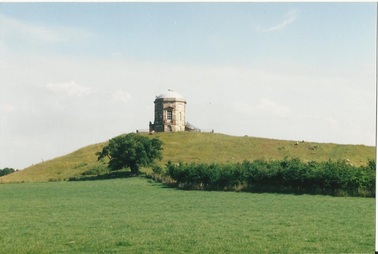 It is thought that the song about the Grand Old Duke of York marching his men up and down the hill may refer to Prince Frederick Augustus, Duke of York, having his men digging out a lake and creating a hill. The Duke bought the Allerton estate from the 4th Viscount Galway in 1786.

The temple, however, is marked on Thomas Jeffrey's map of Yorkshire of 1771 and could have been designed by James Paine.

After the battles of Trafalgar and Waterloo, it was lit by torches and was given its name.