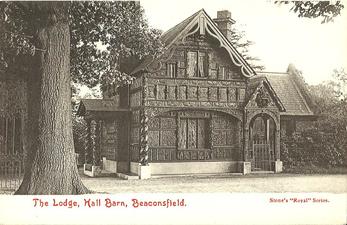 The lodge to Hall Barn was built in the 19th century and   is covered with real and fake Early Renaissance and later   panelling. 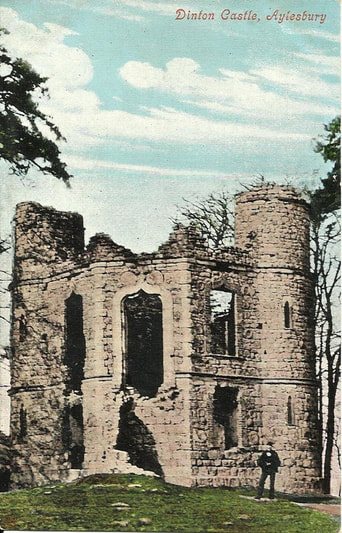 John Vanhatten built the mock castle in 1769 as an eyecatcher from Dinton Hall. The walls are decorated with large ammonites that were from the local quarries. It is thought that non-conformists once used the folly as a meeting place. 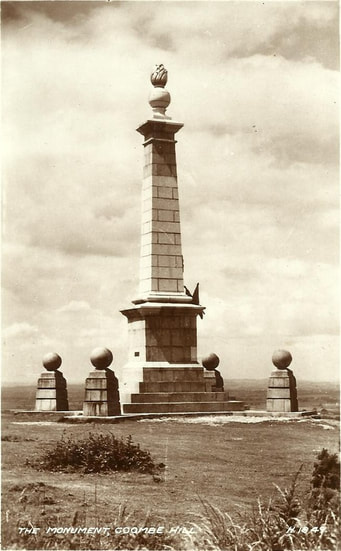 The Monument at Coombe hill was erected in 1904 in memory of the 148 men from Buckinghamshire who died during the Second Boer War. The monument was almost totally destroyed by lightning in 1938 and was rebuilt the same year. The original bronze plaque was stolen in the 1980s and was replaced with a stone plaque. After it was struck by lightning again in the early 1980s, a conductor was fixed. 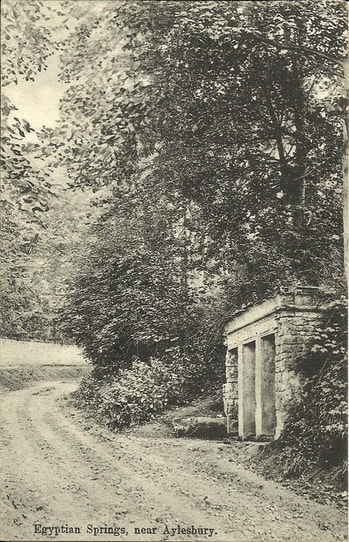 Opposite a spring is a garden alcove seat designed in   1850 by Joseph Bonomi II; Dr John Lee's architect,   Egyptologist and son of Joseph Bonomi.
​
There is a frieze with Egyptian hieroglyphics that record   it being built in the 13th year of Victoria's reign. 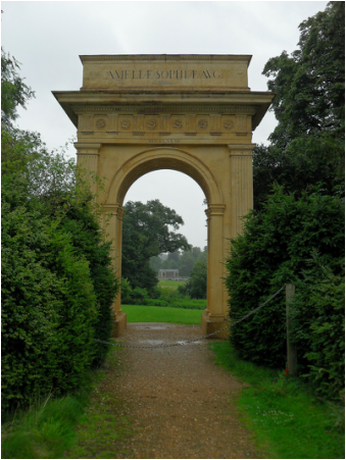 Thomas Pit designed the Doric Arch for Richard Temple that was erected in 1768 for the visit of Amelia, the aunt of George III, in 1770.

The arch also framed the view of the Palladian Bridge and was the entrance to the Elysian Fields. 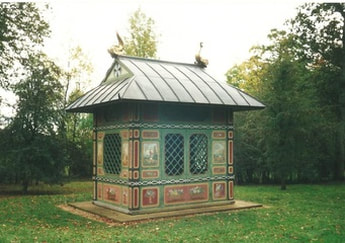 A description of Stowe in 1738 of a 'House built on piles, after the manor of the Chinese' could be the oldest reference in England of a Chinese-styled building.

Originally the Chinese House was 'in the middle of an old Pond' in the Elysian Fields, and was moved to Wooton in about 1750. It has now been restored and is back at Stowe. 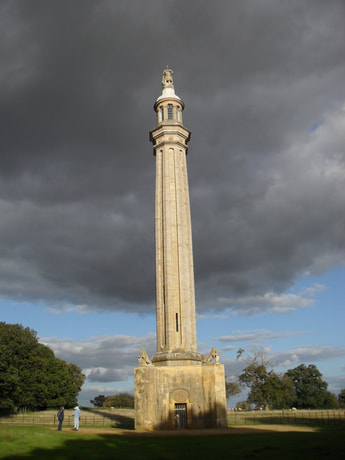 The 104 feet tall Cobham Monument was built in 1747-9, during the last two years of Richard Temple's life. James Gibbs made the initial design that was modified by Lancelot Brown.

The column is octagonal with a single flute on each side. It has an internal staircase leading to a small temple-like belvedere with eight arches and a dome that supports the statue of Cobham. 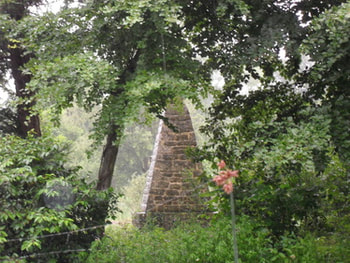 The Congreve Monument was designed by William Kent in 1736 as a tribute to William Congreve from Richard Temple. A monkey is on the top of the pyramid looking at a mirror, just as Congreve held up a mirror to human nature in his plays. A Latin inscription reads:

'Comedy is the imitation of life and the mirror of society'. 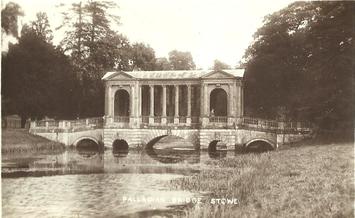 The Palladian Bridge at Stowe was built in 1738 and is   similar to the one at Wilton that was erected in 1736-7
and inspired by Andrea Palladio's rejected design for the   Rialto Bridge at Venice. 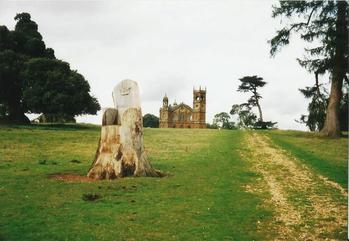 The Gothic Temple was designed by James Gibbs in 1741 and was completed in 1744. It is dedicated 'To the Liberties of our Ancestors'. 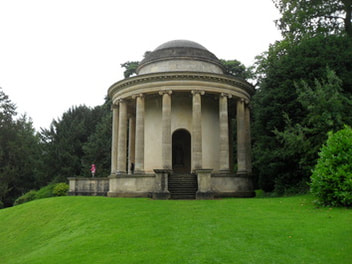 The Temple of Ancient Virtue

The Temple of Ancient Virtue was designed by William Kent and built in 1737. It was based on the Temple of Vesta at Tivoli. 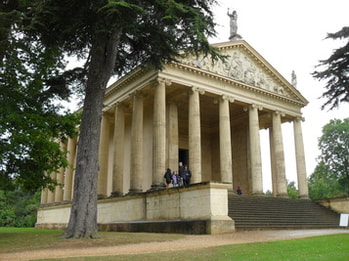 The Temple of Concord and Victory

Built in 1747, and known as the Grecian Temple, it was the first building in England in the Greek style. 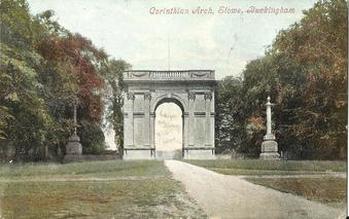 The Corinthian Arch was designed by Thomas Pitt and terminates the avenue to Buckingham. 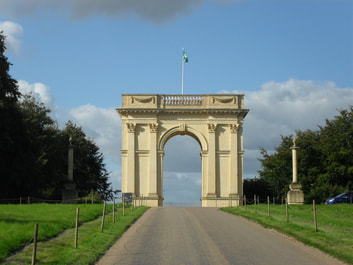 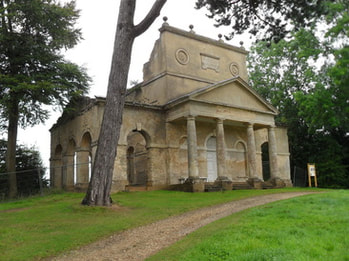 The Temple of Friendship

The Temple of Friendship was designed by James Gibbs and was completed in 1739. 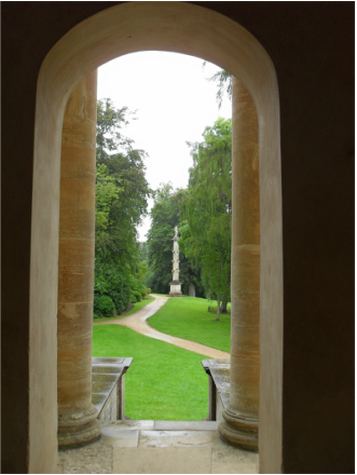 Richard Temple had the column erected in memory of his nephew, Capt. Thomas Grenville, who died in a battle against the French off Cape Finisterre in 1747. It was originally placed in the Grecian Valley in 1749.

It is based on a Rostral column which was an Ancient Roman naval monument that had prows of galleys protruding from the shaft.

The Tuscan column's original statue of Neptune was replaced by a lead statue of Calliope by John van Nost. 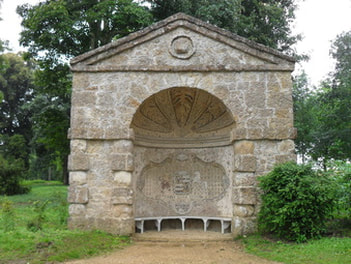 The Pebble Alcove was probably designed by William Kent, and was built in 1739. Coloured pebbles form a mosaic of signs of the zodiac, stars, a whale, a robin and cherries. Richard Temple's coat of arms is in the centre with the Temple family motto 'TEMPLA QUAM DILECTA'; how beautiful are thy Temples. 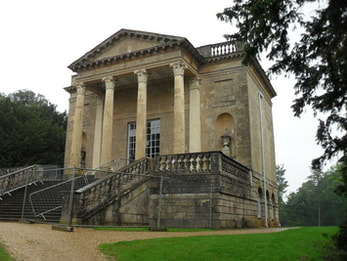 Built in the 1740s and called the Lady's Building, the temple was remodelled in 1772 and the composite portico was based on the Temple of Dianna at Nimes.

The Temple of Diana at Blenheim, Oxfordshire, has a similar portico. 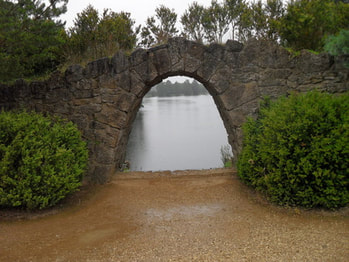 The Rock-work Arch at Stowe is above the Cascade at the Eleven Acre Lake. 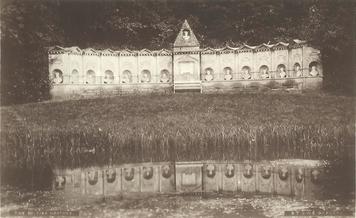 The Temple of British Worthies

The exedra was designed by William Kent in about 1735. The niches contain busts by Rysbrack and Scheemakers. 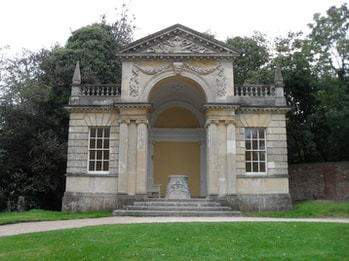 The Ionic style temple at Cliveden was designed by Giacomo Leoni in about 1727 to commemorate George Hamilton's victory at the Battle of Blenheim. 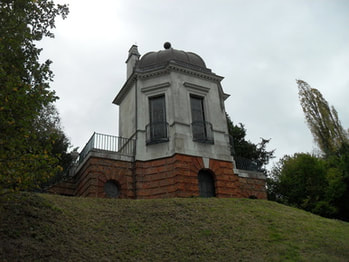 Originally designed as a gazebo and grotto by Giacomo Leoni in 1735 for George Hamilton, in 1893 the building was converted for William Waldorf Astor into a chapel and Astor family mausoleum. 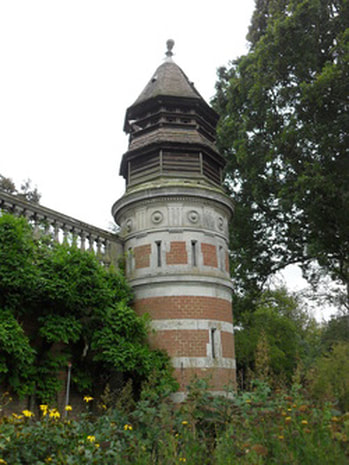 The ornate Dovecote was built in 1869 for Hugh Lupus after he had bought Cliveden the previous year. 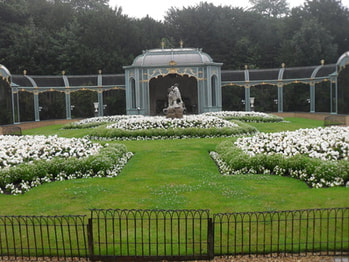 The Rococo-style Aviary at Waddesdon Manor was built in 1889 for Ferdinand Rothschild. 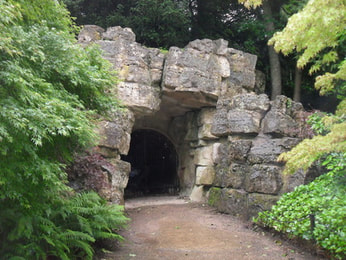 The outcrop is the work of James Pulham & Sons of Boxbourne.

The cave was intended to house Baron Ferdinand's Barbary sheep, but because of the smell it was used as a tool store. The water storage tank is above and forms the roof of the cave. 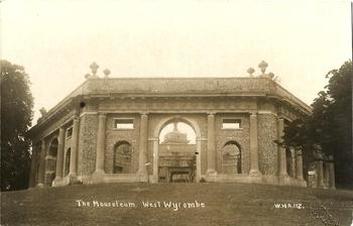 The Mausoleum was designed by John Bastard the Younger, and built on the site of an Iron Age Hill Fort in 1765. The hexagonal building contains urns with the ashes of the Dashwood family. An inscription is to Sir Francis Dashwood, Lord le Despencer, and friends. 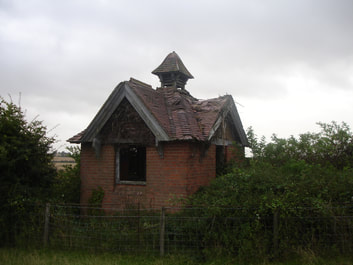 The small decorative pump house in the corner of a field   near Wingrave has now been demolished having suffered   vandalism.